No, Starbucks is not opening a branch in Nairobi

A tweet claiming American coffee company Starbucks is opening a branch in Kenya’s capital, Nairobi, has been circulated online hundreds of times. The tweet is false;  a Starbucks official confirmed to AFP there are no such plans.

The tweet was published on Monday by Metropol TV Kenya, an account run by a business-focused television station launched in Kenya this year. The post archived here by AFP was retweeted more than 500 times and liked more than 800 times.

"BREAKING NEWS: US Coffee giant, Starbucks is set to open its first coffee shop in Kenya. The coffee shop will be based along Nairobi's Mama Ngina Street. @Starbucks, " the tweet reads. 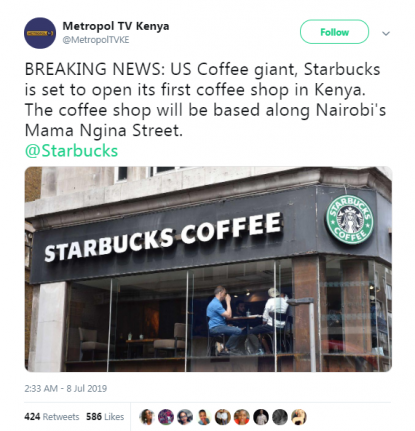 Screenshot taken on July 8, 2019 of the tweet falsely claiming that Starbucks is launching in Nairobi

From the comments on the false post some users appeared excited by the news while others questioned its accuracy.

Georgia Mission, Starbucks press officer, told AFP via email that the information was inaccurate and that there are no ongoing plans to establish a branch in the Kenyan capital.

“We can confirm these reports are not accurate and that Starbucks currently has no plans to open in Nairobi,” Mission said.

As reported by AFP here, Starbucks opened its first cafe in sub-Saharan Africa in Johannesburg three years ago.