No, South African police did not issue warning about mobile network scam

An audio message shared widely on South African WhatsApp groups claims to be a warning from a police officer about a new mobile network scam to steal money from shoppers. A spokeswoman for the South African Police Service told AFP they did not issue the message.

In the audio clip, which has been also transcribed in Facebook posts, a voice begins: “Good afternoon everyone, this is Warrant Officer Du Plessis from the SAPS. Please take note of this following message”.

It claims that they remove the SIM card, note the IMEI numbers and send money from the bank accounts through mobile banking.

We have archived Facebook posts sharing the scam here and here. 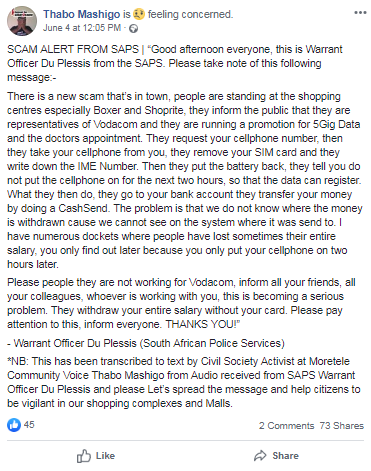 SAPS spokeswoman Brenda Muridili told AFP that the warning was a hoax and confirmed it was not recorded by a SAPS officer.

There's a voice note doing the rounds (below). This has been verified as a hoax! Criminals aren't able to access your cell phone banking using the IMEI – they would need your PIN and/or password, which you should NEVER share with anyone. @SAPoliceService @Vodacom #Scam pic.twitter.com/jkQhPPZkjz

“Criminals aren't able to access your cell phone banking using the IMEI – they would need your PIN and/or password, which you should NEVER share with anyone,” the centre advised.

SABRIC issued tips for users on how to protect themselves in their latest report on Digital Banking Crime Statistics, particularly: “Do not click on links or icons in unsolicited emails”.

While this warning was a hoax, a SABRIC report from 2018 shows mobile network banking scams are a growing trend in South Africa. In 2017, it noted 13,438 incidents across banking apps, online banking and mobile banking. From January to August 2018, it found a 64 percent increase in incidents.

No, this is not a video of US President Trump grabbing a bikini-clad model in London