No, this poll does not show Canadian voter intentions

An online post claims that Canadian Prime Minister Justin Trudeau ranks third in a poll, with 16 percent of voting intentions for the federal election, far behind Conservative Andrew Scheer with 63 percent. However, the company that produced the poll to which the post refers does not exist. The most recent voting intention poll places Trudeau’s Liberal party first with 36 percent, and Andrew Scheer’s Conservative party second, at 35 percent.

“It’s over Trudeau. Here are the latest polling statistics if an election were held today,” says a post shared over 5,500 times in Canada. The numbers that follow suggest a devastating loss for the current Prime Minister , with just 16 percent of voting intentions. According to the post, New Democratic Party leader Jagmeet Singh would come second with 21 percent of votes, while Conservative leader Andrew Scheer would win by capturing 63 percent of voters. 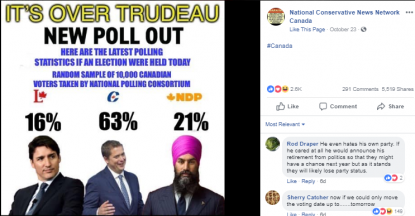 If these numbers look completely out of touch with other recent polls, it is because they are false. The Facebook page “National Conservative News Network - Canada”, which has more than 187,000 followers sourced the numbers to the National Polling Consortium. However, a Google search for that organization finds no matching results.

The false post was published on October 23, claiming the numbers were from the most recent opinion polls. On that date, the most recently published poll was from Ipsos for Canadian company Global Media. That poll placed Trudeau and Scheer in a tight race, with 36 percent and 35 percent of votes respectively. Singh and the New Democratic Party fell third with 20 percent of votes.

The same poll detailed voting intentions by province, and in traditionally Conservative Alberta, Saskatchewan native Scheer did come first, with 63 percent of the vote, but even there Liberals captured 18 percent of voters.

Screenshot of an October 2018 report by polling company Ipsos

The only recent poll to predict a Conservative victory was released on October 16 by Toronto-based polling firm Forum Research Inc. However, it forecasted a Conservative win with 41 percent of the Canadian vote.

The misleading post also alleged that the poll was based on a sample of 10,000 Canadians. That sample size is suspiciously large as polls regarding Canadian elections in October were based on participant pools between 1,226 and 2,410 individuals.

Philippe Fournier, founder of the data  and statistics website Qc125, told AFP in an email that a national poll using 10,000 participants is unlikely, because the costs of such a poll would not be worth the results.

“No polling firm in Canada could afford to spend this much, and no private media would spend such a sum. It’s ridiculous,” he said.

Fournier, who is regularly in contact with Canadian pollsters, added that he had never heard of the National Polling Consortium.

The next Canadian federal election will take place on or before October 21, 2019.