No, this video does not show passengers aboard an Indonesian Lion Air plane moments before it crashed

A video purporting to show panicked passengers aboard an Indonesian Lion Air plane before it crashed into the sea has gone viral with millions of views on social media, and been reported as fact by multiple news outlets around the world. The video is not from the ill-fated plane but an earlier flight in Indonesia that did not crash.

Lion Air Flight JT 610 crashed into the Java Sea shortly after take off on Monday October 29 with 189 people on board. There were no survivors.

Within hours of the plane going missing a video began circulating online claiming to show passengers inside a darkened cabin calling out: “Allahu akbar”, or “God is greater”, and other Islamic verses as the plane apparently was out of control.

AFP has tracked down dozens of Facebook pages that have posted the video with claims it was from the crashed Lion Air plane, including @SpotLightHumanity where it has been viewed more than 1.3 million times. 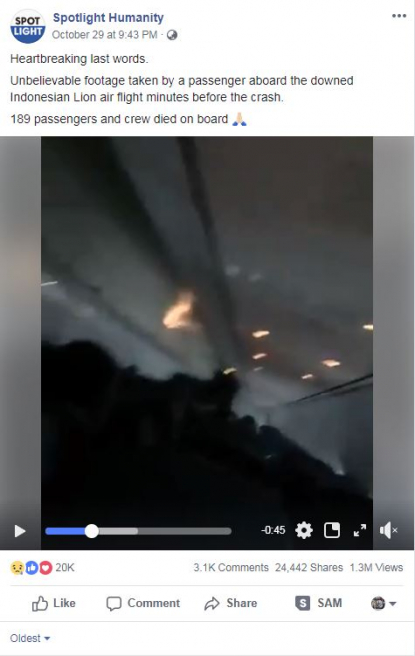 Among news outlets, Russia Today posted the video on its Arabic Twitter account where it has been viewed more than 90,000 times. 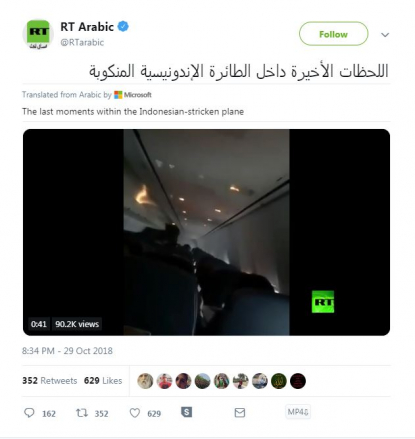 The video also appeared on news websites in Greece, Pakistan, India and Tunisia.

The video went viral despite Indonesian authorities reacting quickly to say it was from a previous Lion Air flight, which did not crash.

Indonesia’s disaster mitigation agency spokesman, Sutopo Purwo Nugroho, said on Twitter on October 29 -- the day of the crash -- that the video was from Lion Air flight JT 353 to Jakarta from Padang, another Indonesian city on an unspecified earlier date.

Sutopo did not give details as to where the video originated. 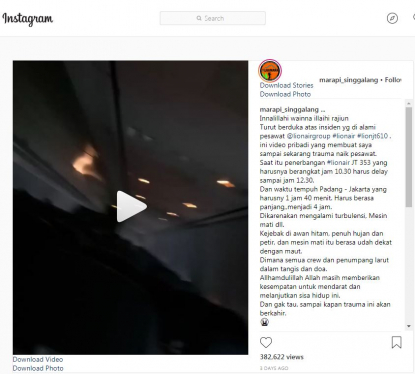 The Instagram post was accompanied by a lengthy caption which, in part, says: “Deep condolences for the incident experienced by @lionairgroup plane #lionair #lionjt610. This is a video taken by myself on a flight that made me so traumatised I no longer want to travel by plane.”

Ditama told AFP he was was aboard the Lion Air JT 353 flight, which was heading to Jakarta from Padang, on December 11, 2017.

Ditama said he took the video from a clip he posted to Twitter on December 13, 2017, and that he re-posted it on Instagram as a way to express his emotions following the crash of JT 610.

Ditama said he made clear in his Instagram post where the video came from, and that he was surprised it had been shared and misrepresented without his permission.

“I don't know who might have circulated the video without my permission and then misused it,” he told AFP.