No, this photo does not show UFC champ Khabib Nurmagomedov with an anti-Indonesian president t-shirt

Multiple Facebook posts have shared a picture purporting to show Russian Ultimate Fighting Championship (UFC) champion Khabib Nurmagomedov holding a t-shirt with the slogan of an anti-Indonesian president Joko Widodo movement. The image is manipulated from an original image on the wrestler’s Instagram feed that does not contain any political slogans.

The photograph appears to show Nurmagomedov holding a black t-shirt that bears the hashtag #2019GANTIPRESIDENT. The slogan is part of a campaign that opposes Widodo’s reelection bid in 2019.

The athlete is flanked by two men, one of them wears a black shirt that appears to have the words: “AL-FATIHAH NOT ALFATEKA” across it. This refers to a debate over whether the Indonesian leader mispronounced the name of a Muslim verse at a recent event.

The image was posted by Facebook page Masa Era Baru on October 11 with a caption that said:  “Thank God, We got new support from fellow Muslim from overseas, Amen.” It was shared more than 1,000 times.

A reverse image search found the original photograph, which has been widely shared in Indonesia, was first posted by the wrestler on Instagram on October 1, 2018.

The original photo shows Nurmagomedov holding a black shirt which says: “TRUST ME, I’M A CHICKEN WHISPERER”. The man on his right is wearing a largely plain black shirt. 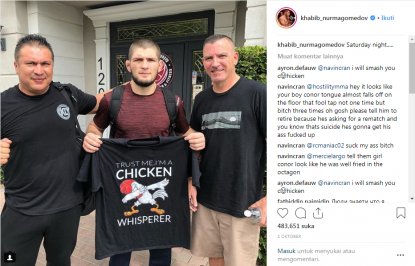 Nurmagomedov kept his UFC lightweight crown after beating his Irish rival Conor McGregor in an October 9 match, followed by a post-match brawl.

Nurmagomedov has previously spoken about his Muslim faith.

The Nurmagomedov-McGregor fight attracted significant attention in Muslim-majority Indonesia partly due to the Irishman’s pre-match insults attacking the Russian’s religion and family.