No, this photo does not show Canadian Muslims breaking social distancing during Ramadan 2020

A photo has been shared more than 1,000 times on Facebook alongside the claim it shows the Muslim community in Canada’s Calgary breaking COVID-19 social distancing rules during Ramadan. This is false; the photo was taken during the Eid al-Fitr holiday in August 2019, months before the novel coronavirus pandemic, and mosques in Calgary are closed.

“Check out the social distancing from Calgary Muslims during Ramadan,” says a Facebook post from late April 2020. Below, a photo shows hundreds of men under a large tent. Several identical versions of the posts have been shared since April 25, shortly after the beginning of Ramadan, which started on April 23 this year.

According to social media monitor CrowdTangle, one post, which has since been deleted, was shared in several large Canadian Facebook groups. 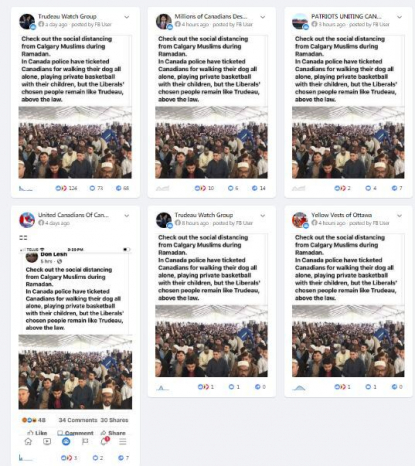 Screenshot of results from CrowdTangle Search

However, the photo used to decry Calgary Muslims’ alleged breach of social distancing during the pandemic was taken in August 2019, months before the novel coronavirus was first reported in China.

Dan McGarvey, a photographer for Canada’s national broadcaster CBC, took the photo at a ceremony celebrating the start of Eid al-Fitr, another Muslim holiday, on August 11, 2019 at Calgary’s Akram Jomaa Islamic Centre. 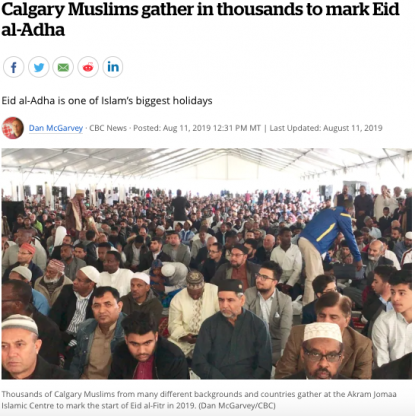 Screenshot of the CBC article featuring the original photo

Imam Fayaz Tilly, a spokesman for the Muslim Council of Calgary, confirmed to AFP that the posts were false.

“I think most Calgarians know that this was deliberately shared to create confusion,” he said.

“We immediately suspended prayers, Friday prayers and all congregations, even before government regulations. All of our programs are being streamed online to various social media platforms,” Tilly told AFP.

In order to contain the COVID-19 pandemic, the city of Calgary declared a state of local emergency on March 15, and gatherings of more than fifteen people are prohibited throughout the province of Alberta, in which Calgary sits.

As a result, places of worship have closed their doors, including the Akram Jomaa Islamic, which is offering Facebook Live sermons and is delivering iftar, the meal breaking the daily Ramadan fast at sunset, to community members at home.

​AFP Fact Check has debunked more than 400 instances of false or misleading information about the novel coronavirus. A roundup of our work in English can be found here.