Skip to main content
A rally in Woodland Hills, California calls for the reopening of the state after measures were implemented to stop the spread of Covid-19, on May 16, 2020 (AFP / Mark Ralston)

Social media posts linked to a California anti-vaccine group claim that a state bill allows for a personal belief exemption to new vaccine mandates for children. This is false; the California Department of Public Health (CDPH) and the office of the state senator who sponsored the bill confirmed that since 2015 the most populous state in the US only recognizes medical exemptions to vaccination requirements.

“Share everywhere because you will not be told by doctors or schools CALIFORNIA HAS A PERSONAL BELIEF EXEMPTION to any NEW vaccine added to the schedule after June 2015 for public & private daycare, preschool & k-12,” says a June 21, 2021 Instagram post.

“This Is A Weapon. We Call It #11-Sec3 Use It To Fight For Your Children,” claim identical posts found on Instagram here and here, and Twitter here. 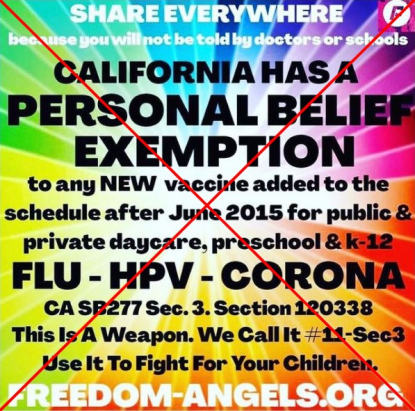 The posts refer to Senate Bill 277, signed into law on June 30, 2015 by then-Governor Jerry Brown. The bill was challenged in court, but upheld by the Second Appellate District’s Court of Appeal.

The measure, which aimed to improve vaccination rates following a measles outbreak that began at Disneyland, removed personal belief as a valid reason to be exempted from the shots required to attend public and private schools or day care centers in California. Such exemptions previously allowed parents to excuse their children if the receipt of vaccines did not align with their religious or philosophical beliefs.

The posts reference the Freedom Angels Foundation, best known in California for its opposition to state-mandated vaccines. The group had previously shared the claim on Instagram and Facebook in 2020, and protested in Sacramento, demanding the reopening of the state in the midst of the coronavirus pandemic.

The post claims that within SB 277, there is a personal belief exemption allowed for newly mandated immunizations. In reality, non-medical exemptions were removed effective July 1, 2016.

“California does not have a personal belief exemption as of the legislation that Dr Pan passed in 2015, and that Governor Brown signed into law,” Shannan Velayas, the communications director for California State Senator Dr Richard Pan (co-author of SB 277), told AFP on June 24, 2021.

Additional comments, analysis and official policy statements on several government websites, including the Medical Board of California and the California Department of Education, confirm the lack of personal belief exemption.

In response to the claim, a CDPH spokesperson told AFP on June 23, 2021: “California eliminated the personal belief exemption (PBE) for immunizations required under state law.”

The spokesperson said that CDPH retains “the discretion to add other immunizations to the list of required school immunizations.”

The section highlighted in social media posts (Sec 3. 120338) does not provide a loophole for parents and guardians to avoid giving their children the required vaccinations. It is a “grandfather” clause that allows those who had already obtained personal belief exemptions before the new law went into effect, to still be able to claim them for this purpose. A parent must have expressed in writing, prior to 2016, that they are opposed in general to vaccines.

None of the vaccines for disease mentioned in the claim (Flu, HPV,  or Covid-19) are currently mandated in California day care centers, primary or secondary schools. Some are currently required at state universities.