Disney did not copyright Norse god

Facebook posts shared thousands of times claim that The Walt Disney Company tried to copyright the Swahili phrase “Hakuna Matata,” the Mexican holiday Dia de los Muertos, and most recently the Norse god Loki. But intellectual property experts say these concepts are not original and therefore ineligible for copyright, and Disney says the posts demonstrate a misunderstanding of laws governing use of the terms.

“Disney 1994: Tries to copyright the phrase Hakuna Matata. The Swahili rightfully calls them out. Disney 2017: Tries to copyright Dia de los Muertos, a Mexican religious holiday. They get called out on their bullshit pretty damn fast and cease on their attempt. Disney 2021: They now want to copyright an ancient Norse pagan deity,” reads a June 21, 2021 post shared more than 10,000 times. 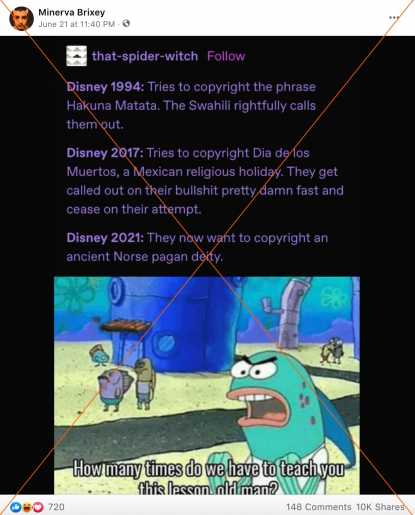 Another Facebook post says: “Disney trying to copyright the deity Loki sounds like a sitcom-level ridiculous way to actually be cursed by the actual god Loki.”

A copyright in the US protects “artistic, literary, or intellectually created works, such as novels, music, movies, software code, photographs, and paintings,” while a trademark is “a word, phrase, design, or a combination” used on goods or services -- for example, a T-shirt or a mug.

Intellectual property law professor Christine Farley explained that a copyright “requires originality,” but the concepts in the posts “are pre-existing and therefore not original.”

In contrast, trademarking pre-existing words like Hakuna Matata, Dia de los Muertos, or Loki can be used to protect “any device that is used in commerce and distinguishes one entity’s goods or services from another,” the American University Washington College of Law professor said.

Farley cited Disney’s trademark registration of “Hakuna Matata” -- which roughly translates as “no worries” -- on a T-shirt as an example.

Meanwhile, the company has a copyright for the original song of the same name in “The Lion King” movie.

Julia Ross, an intellectual property lawyer and professor at Georgetown Law, agreed that copyright applies only to “the specific expression” of ideas, “and a person/corporation can only copyright original expressions (i.e., something that they create).”

For Loki, she said: “To the extent that components of that character and the stories told about him were original and unique expressions of the idea of the pagan deity, they would be copyrightable, but the idea itself and just the name itself are not copyrightable.”

A good test for trademark viability is whether a consumer would be misled by the origin of a product, said copyright law expert and Berkeley Center for Law & Technology professor Pamela Samuelson.

“Short phrases are never copyrightable,” she said, and neither are holidays -- like Dia de los Muertos.

A spokeswoman for Disney responded to the social media claims: “Disney does not claim trademark and copyright for Norse gods or deities and their mythologies. Those are in public domain.”

Instead, the company has trademarked “Marvel or Marvel Comics' versions of the character Loki. Disney is not the only company to do this,” she said. “For context, there’s more than 25 Loki trademarks registered in the US to other rights holders,” calling the claims a “basic misunderstanding of trademark law.”

Searching the US Patent and Trademark Office database for “Loki” indeed yields dozens of results for live trademarks beyond those of Marvel. 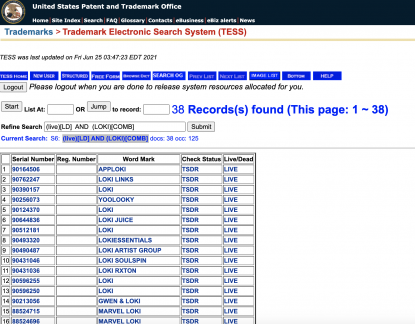 Screenshot of search results on the US Patent and Trademark Office’s electronic search system, taken on June 25, 2021

An incident reported in June 2021 where online art marketplace Redbubble removed Loki-related artwork may have prompted the new wave of controversy on the topic. The Disney spokeswoman said the company did not ask that the content be taken down and that Redbubble reinstated the content following an investigation.