No, this is not a video of protesters marching to Jakarta after President Joko Widodo's re-election

A video has been viewed tens of thousands times in a Facebook post alongside a claim it shows a Muslim group marching to Jakarta to attend a protest following the re-election of President Joko "Jokowi" Widodo on May 21, 2019. The claim is false; the footage has circulated online since at least November 2016 in reports about a different protest.

The video was posted here on Facebook on May 19, 2019. It has been viewed more than 21 thousand times and shared more than 490 times.

The video shows a large group of people walking along a road together waving flags. Most of them can be seen wearing traditional Muslim attire.

Below is a screenshot of the one minute video: The Indonesian language caption translates to English as:
“Long march to Jakarta for the People's Sovereignty Rally, May 21-22, at the Indonesian General Elections Commission of the Republic of Indonesia. God is Great...”

The misleading Facebook post references a protest held in Jakarta after the re-election of Joko "Jokowi" Widodo on May 21, 2019.

Ahead of the official announcement of results on May 21, presidential candidate Prabowo Subianto had alleged voter fraud and some of his supporters subequently called for protests in Jakarta.

Here is an AFP report from May 22, 2019, on protests in Jakarta following the official announcement of Jokowi's re-election.

Here is an AFP report from April 18, 2019 on tensions before the electoral commission's official announcement of the results.

The claim in the misleading Facebook post is false; the footage has circulated online since at least November 2016 in reports about a different protest.

A reverse image search on Google using a screenshot of the video in the misleading Facebook post found this video, which was published on YouTube on November 30, 2016.

Below is a screenshot of the YouTube video, which is one minute and 25 seconds in length: 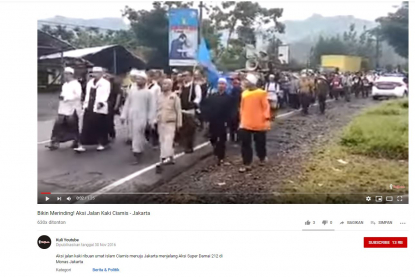 Screenshot of the original video 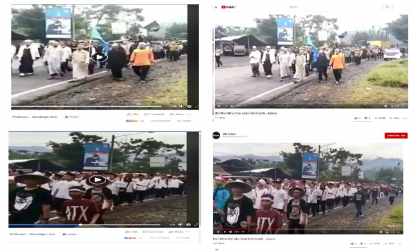 Comparison of the misleading video (L) and the original footage (R)

The video's description translates to English as: “The long march of thousands of Muslims to Jakarta before the Super Peaceful 212 Rally at the National Monument in Jakarta.”

“212” refers to a rally held on December 2, 2016, in which 200,000 Muslim protesters took to the streets in Jakarta to demand Basuki Tjahaja Purnama, the then Chinese Christian governor of the capital, be arrested for insulting Islam. This is an AFP story about the rally.

“Ciamis” refers to a district in the Indonesian province of West Java. Here is its official website.

Here is a report about the "212" protesters who did a long march from Ciamis to Jakarta, which was published by Indonesian news site Detik on December 1, 2016.