No, this is not a photo of a shrine to the Prophet Mohammad in a mountain cave

A photograph posted on Facebook and shared thousands of times purports to show a shrine to the Prophet Mohammad in a mountain cave. Other versions of the image which have been shared tens of thousands of times show statues of the Hindu god Shiva or the Buddha in the same location. The photographs are all doctored versions of an original image of a cave in China’s Tianmen mountains, where there is no statue or shrine.

This January 27, 2019 Facebook post, which has been shared nearly 6,000 times, contains an image showing a set of stairs leading through a mountain forest to a cave where the Green Dome from the Mosque of the Prophet appears to sit in a beam of light. 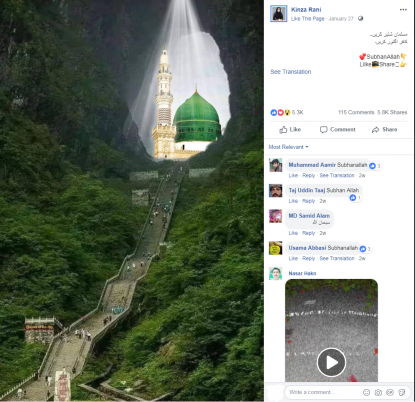 Here is a photo on AFP Forum and here is a Getty Images photo showing the Green Dome at the Mosque of the Prophet, which is a holy site for Islam located in Medina, Saudi Arabia.

This September 13, 2017 Facebook post, which has been shared more than 82,000 times, contains an identical photo but with a huge statue of the Hindu god Shiva in the cave. 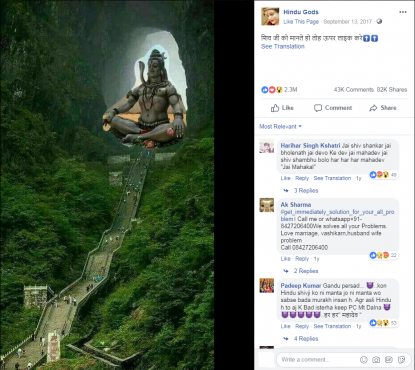 Other versions of the photograph show a statue of Buddha in the same location, for example here on Pinterest.

The cave in the doctored images is actually Heaven's Gate at Tianmen Mountain, in China’s central Hunan province.

Here is an October 2017 Google Maps image of the stairs and cave:

According to the official Tianmen Mountain website, the area is a Level 5a National Tourist Spot and National Forest Park of China. The exact spot featured in the misleading photographs is called the “entrance to Tianmen cave”.

AFP Forum has multiple photographs of the location, for example here and here, which is a popular venue for extreme sports including wingsuit flying and mountain biking. 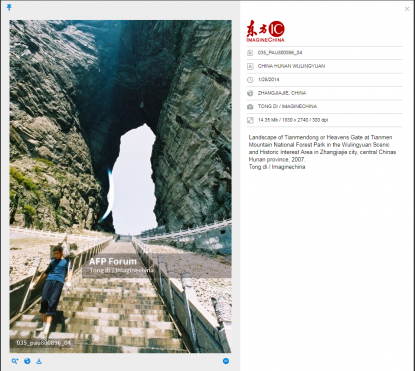 Screenshot of Baidu maps photograph of the entrance to Tianmen cave

The actual image of the cave entrance used in the misleading posts has circulated widely online since at least 2016, for example here on a Spanish Google plus account, here on a Turkish Twitter feed, and here on a Hindi-language blog.

Below is a side by side comparison of the misleading images and the original photograph in which key identifying markers -- for example, the locations of people walking up the stairs and a Chinese-language sign in the left hand lower corner of the image -- are identical.

From left to right, the purported shrine to the Prophet Mohammad, the statue to Hindu God Shiva, the statue of the Buddha, and the original image:

Side by side comparison of the misleading images with the original