No, this is not a photo of Palestinian refugees

An Indonesian Facebook post shared an image that it claims shows a group of Palestinian refugees, including a young boy it says is holding a Koran. The image is actually an AFP photo of Syrians fleeing their homes near Damascus.

The image was posted to religious Facebook group BERITA ISLAMI on October 31, 2018, with the caption: “God has willed it. This image shows Palestinian citizens fleeing from their homes. Don’t neglect the boy who holds Koran in this picture. Please comment ‘God is amazing’.” 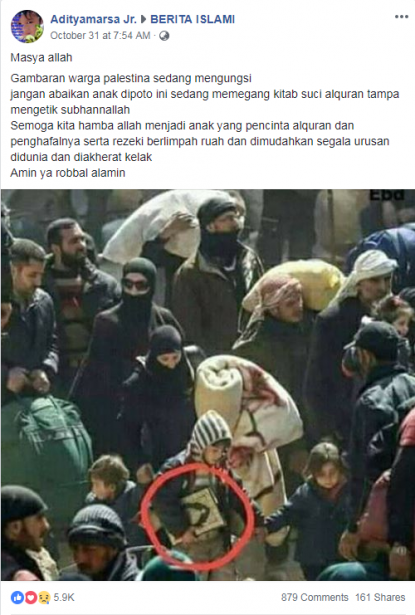 The post attracted nearly 6,000 reactions in three weeks. The majority of the comments say simply :“Amen.”

The image has been used out of context.

The original is an AFP photo taken on March 25, 2018, showing Syrian civilians and rebel fighters on the outskirts of the capital, Damascus.

The photo is viewable on AFP's photo platform, AFP Forum, and is copied below. 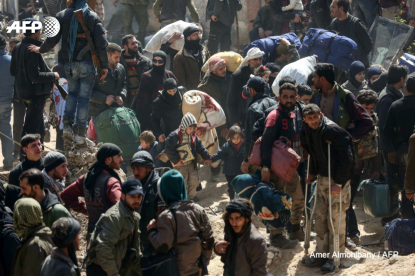 The caption for that photo reads: "A picture taken on March 25, 2018 shows Syrian civilians and rebel fighters gathering for their evacuation from the town of Arbin in the Eastern Ghouta region on the outskirts of the capital Damascus, following a deal with the regime. The deal is expected to see some 7,000 people bussed from Arbin and Zamalka towns and the district of Jobar to a rebel-dominated part of northern Syria. AMER ALMOHIBANY / AFP".