No, late Philippine dictator Ferdinand Marcos does not hold the Guinness World Record for being the "World's Most Brilliant President in History"

A Facebook post claims late Philippine dictator Ferdinand Marcos holds a Guinness World Record for being the 'Most Brilliant President in History'. Guinness World Records has given him no such accolade, although it does list him for committing the 'Greatest robbery of a Government'.

The post claims that Marcos, who led the Philippines for two decades until he was toppled in a 1986 “People Power” revolution, holds the Guinness World Record for being the “Most Brilliant President in History”. 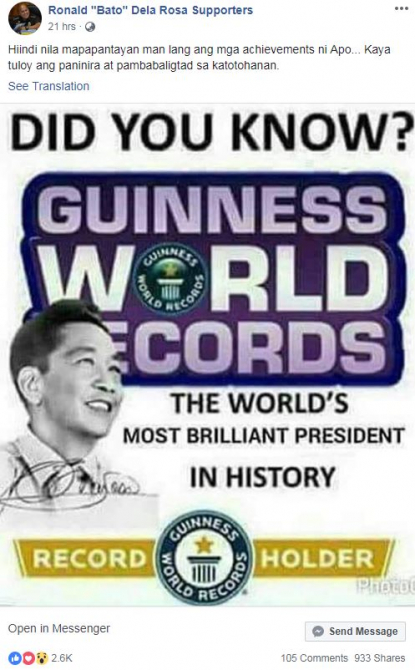 The text in the post, when translated to English, says: “They cannot even match Apo’s achievements… that’s why they assail him continuously as well as distort the truth”.

“Apo” is a term of respect used by some in the Philippines.

No accolade for "World's Most Brilliant President" exists for Marcos on the Guinness World Records site.

Below is a snapshot of the search result: 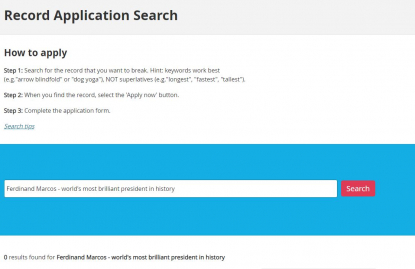 The only entry for the late Philippine leader shows he has the record for the “Greatest robbery of a Government.”

That link is publicly available here.

AFP initially detected the false post on a page that identified itself as supporting Ronald dela Rosa, the Philippines’ former police chief who is running for a Senate seat in 2019 elections.

Dela Rosa and the Marcos family are allies of President Rodrigo Duterte.

The dela Rosa page has nearly one million followers, and the false post on November 19 attracted more than 2,700 reactions and nearly 1,000 shares in less than 24 hours.

Some people who commented identified the post as false, while others indicated they thought it was true.

“I believe so... almost anything in good governance started with Marcos,” wrote one person.