No, this is not a photo of Indonesian presidential candidate Prabowo Subianto accepting an award for repeatedly apologising

Multiple Facebook posts have shared an image that purportedly shows Indonesian presidential candidate Prabowo Subianto accepting an award for making the “most apologies in 2018”. The claim is false and the image is doctored.

The image was shared on November 28 by Kata Kita, a Facebook page that posts content in support of Indonesian president Joko Widodo, who is also running in Indonesia’s presidential election next year.

The image shows retired general Subianto reaching out to shake hands as he receives a framed board which says: “MURI Record for the most apologies in 2018” and his name. 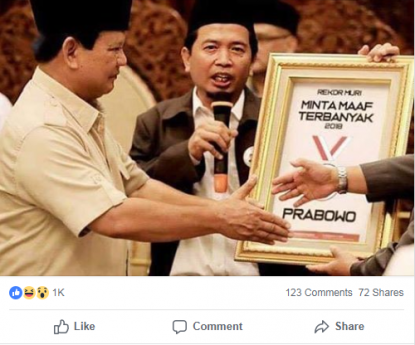 The post has a caption that mentions four occasions when Subianto made controversial comments in campaign speeches and his apologies for two of the four statements.

Another post shared the picture with a caption saying: “Congratulations, Mr. Prabowo.. You need to be appreciated.”

A reverse image search found the photo was a cropped, edited version of an image showing Subianto receiving a board displaying words of support from the Egypt Alumni Communication Forum (FSAM). 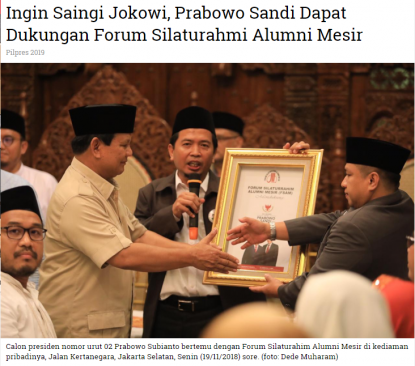 The photograph was taken during a November 19 meeting between Subianto and representatives from the group and was published by radarcirebon.com and suara-islam.com in articles about the meeting.

The doctored photograph and original photograph are identical except for the words on the frame being presented to Subianto.

Other Indonesian news organisations, including CNN Indonesia and state-owned Antara, also reported the event, although they did not use the same picture.

In the Antara photo accompanying their article on the Prabowo-FSAM meeting, the man holding the microphone in both the original and doctored images can be seen (front row, third from left) wearing the same clothes, speaking to the press. 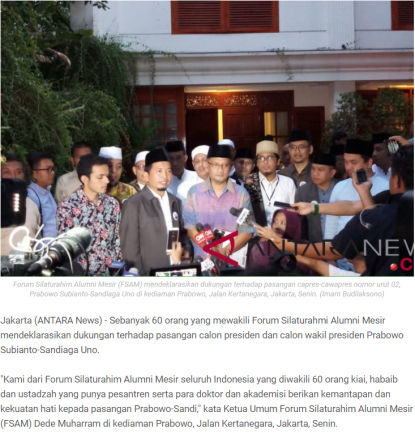