No, this is not a photo of Indian politician Rahul Gandhi with the perpetrator of a deadly suicide attack in Kashmir

An image that has been shared thousands of times on social media claims to show Indian opposition leader Rahul Gandhi alongside the perpetrator of a suicide bomb attack that killed more than 40 Indian troops in Kashmir. The image is doctored from an original taken of Gandhi in 2014 on the campaign trail in which there are no links to terrorism.

The doctored photo appeared after a suicide attack killed more than 40 Indian soldiers in Kashmir on February 14, 2019.

It purports to show Gandhi next to a man who local media have identified as Aadil Ahmad of the Pakistan-based militant group Jaish-e-Mohammed (JeM), and responsible for the bombing. Here is one of those local media reports.

Here is an AFP report from February 16, 2019, on the incident that also includes a reference to Ahmad being identified as the accused bomber.

Below is a screenshot of the doctored photo posted to Facebook. Rahul Gandhi is on the right, wearing the cap. 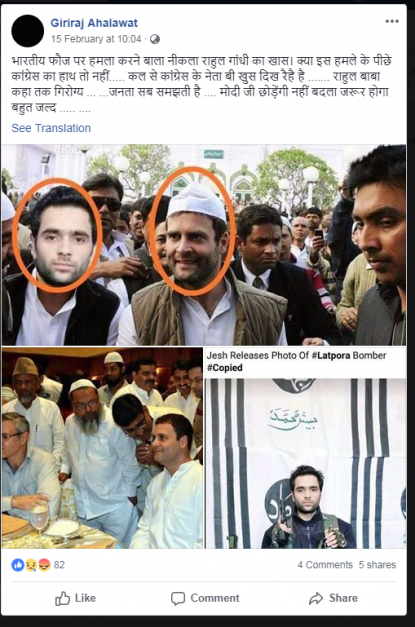 The Hindi text above the photos claims that Gandhi is a friend of the perpetrator of the attack and questions whether the opposition Congress party was involved.

The doctored photo was also posted on Twitter, including here. Below is a screenshot of the misleading tweet. 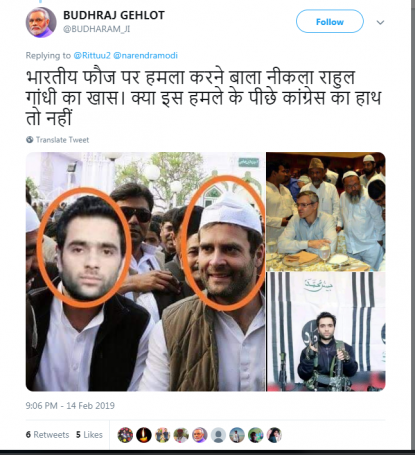 AFP did a reverse search of the image on Google, which showed many results of a photo of Gandhi in the same pose and same attire but next to someone who does not look like the man identified as the suicide bomber.

AFP then did a second reverse image search on the highest resolution version of the photo that was found on the initial search. This led here to the original on the website of international photo agency Getty Images.

Below is a screenshot of the photo on Getty's website. 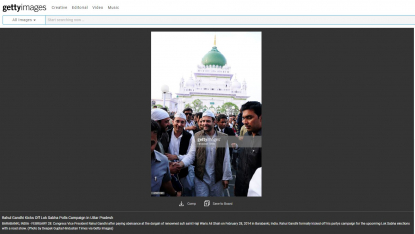 The caption alongside the photo on Getty states it was taken by a Hindustan Times photographer of  Gandhi in Barabanki, in the northern state of Uttar Pradesh, on the campaign trail for 2014 elections.

The man standing beside Gandhi is clearly not Ahmad. 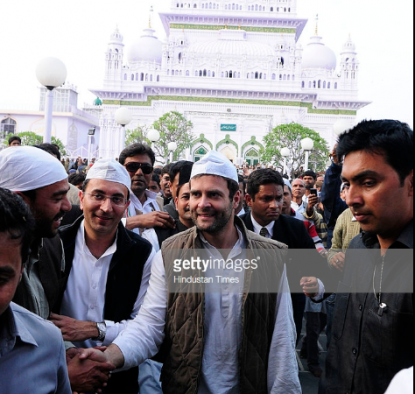 This AFP fact check was published after several other fact checking organisations, including Boom,  The Quint and The Times of India, had debunked the photo with similar results.