Posts shared thousands of times on Twitter and Facebook claim that Nigeria’s elections were delayed because Amina Zakari, a relative of President Muhammadu Buhari through marriage, was in charge of the vote’s insufficient logistical preparations. But Zakari is not in charge of logistics for the vote.

The claim, shared by Nigerian opposition figures -- including Senator Ben Murray-Bruce and Reno Omokri, a former media aide to ex-president Goodluck Jonathan -- has been reposted more than 3,000 times. 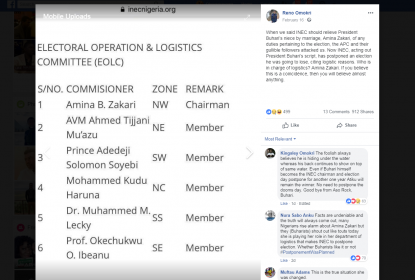 The presidential vote has indeed been delayed until February 23 due to what Nigeria’s Independent Electoral Commission (INEC) said were logistical difficulties. Zakari does work for the INEC, but not in a logistics role.

The widely shared posts include a false screenshot purporting to show that Zakari is the head of INEC’s logistics committee.

Omokri’s version, which was shared more than 900 times, claims that Zakari was “acting out President Buhari’s script” and “has postponed an election he was going to lose, citing logistic reasons. Who is in charge of logistics? Amina Zakari.” 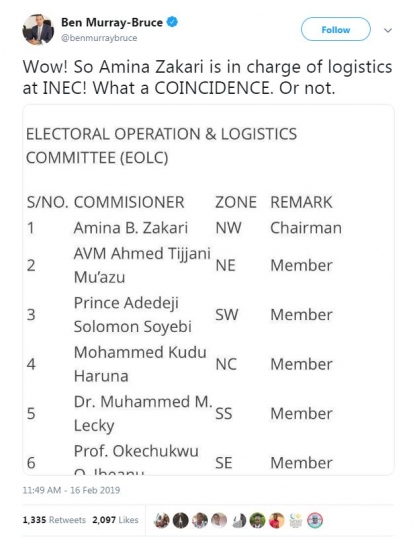 But INEC had in fact announced on January 3 that retired air vice marshal Ahmed Tijjani Mu’azu would be in charge of the ad hoc logistics committee organising the election, which was originally due on February 16.

Ongoing...
Inauguration of two Ad-hoc Committees to drive the important components of the electoral process in the 2019 General elections.
I. Electoral Logistics Committee responsible for Co-ordinating of logistics
2. National Collation Centre #NigeriaDecides2019 pic.twitter.com/SX8mMgVH9W

Zakari was on the same date named head of the ad hoc collation committee, organising the counting of the votes. This led to complaints from the opposition, who claimed that Zakari could help rig the election as a relative of sitting president Buhari.

Buhari’s opponents have previously claimed that the two are blood relatives, but Zakari, her family, and the Nigerian presidency have said they are related through marriage only.

"An inter-marriage occurred in their extended families, so the imputation of blood relationship between the president and the electoral commissioner is a simple lie," Garba Shehu, special assistant to Buhari on media and publicity, said at the time of the row in January.

Zakari is not in charge of the logistics for this election, but she was previously chairwoman of INEC’s logistics committee from January 2017 until October 2018.

The false screenshot appears in the same format as the committees listed on INEC’s website, but the uneven formatting suggests it has been doctored.

Zakari’s name does appear on a logistics committee list currently available on the INEC website, but a spokesman for the electoral commission said it was out of date. INEC spokesman Rotimi Oyekanmi said the commission upgraded its website about 10 days ago, and there were some issues with the transfer of data. He confirmed that Zakari is not on any logistics committee, stating that the website will be updated within the next 24 hours. 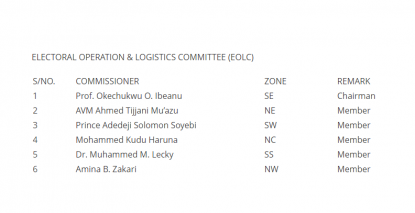 A screenshot of the INEC website, showing Zakari's former role, taken on February 18, 2019