No, the Islamic State group is not ‘hacking’ the profiles of WhatsApp users in India

Posts that have been viewed thousands of times on social media claim the Islamic State group is hacking WhatsApp accounts in India. The posts, attributed to Delhi's head of police, advise users to remove their display pictures. The claim is false; there is no current or former Delhi police commissioner with the name given in the post and WhatsApp said it was a hoax.

The posts, for example this one published to Facebook on October 6, 2018, contain a message in Hindi purportedly from "A.K. Mittal(IPS)", who is described as "Commissioner Delhi.​" IPS stands for Indian Police Service.

The misleading posts' caption starts with the words "IMPORTANT NOTICE" in English and "warning" in Hindi.

The posts often contain a video, for example an animation on the subject of supposed WhatsApp hacking here or a seemingly unrelated clip of a woman dancing here, which has been viewed around 2,600 times.

Translated into English, the caption says: "Hi friends. If you have profile picture on your WhatsApp display, please change it immediately because Isis are using the platform to plan their terror activities and these hackers have your WhatsApp numbers and can misuse your profile pictures.

"WhatsApp CEO has advised users to not use a display picture for the next 20-25 days. WhatsApp engineers will work and cooperate with you to keep you safe. Please forward this message. 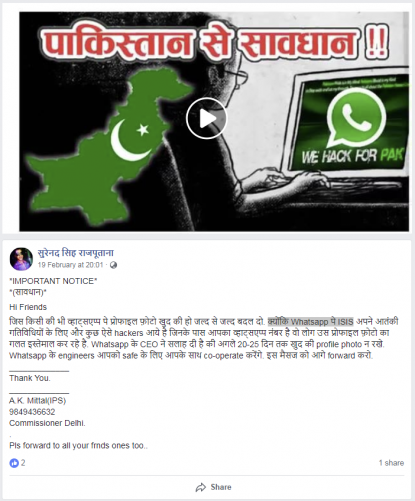 The current police commissioner in Delhi is called Amulya Patnaik, according to the official police website here.

The same site lists all former Delhi police commissioners. None of them are named A. K. Mittal.

The phone number given under Mittal’s name in the misleading posts’ caption does not work.

AFP contacted WhatsApp to enquire about the claims.

The company’s head of communications Carl Woog told AFP: "This is a false rumor. WhatsApp cares deeply about the safety of our users, and we help protect your messages from hackers by providing end-to-end encryption, which means that only the sender and recipient can read your messages and no one else."

The hoax has circulated online since at least 2016, for example here is an Indian Express fact check of a similar claim from July 5, 2016.