No, this video does not show people in Kashmir fleeing as India-Pakistan war begins

A video that has been viewed more than a million times on Facebook purportedly shows people in Kashmir fleeing to safety after war between India and Pakistan begins. The claim is false; the footage has circulated online since 2017.

The misleading videos, for example this one which has been viewed 230,000 times, were posted to Facebook February 26, 2019 -- the same day that India announced it had conducted airstrikes in Pakistan’s Balakot.

Here is an AFP report on the Indian airstrikes.

The footage shows thousands of people running and walking across mountain terrain, some carrying bags or sticks. 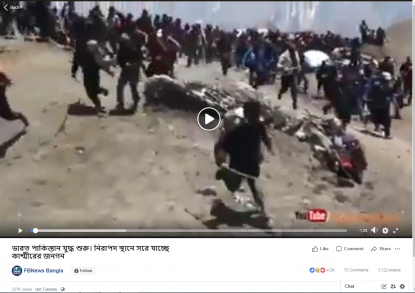 The video was also posted here where it received 1.5 million views before the content was taken down, and here where it was viewed 28,000 times since being posted February 27, 2019. ​

The word “lajimbudha” can be seen in orange lettering at the bottom right hand corner of the misleading video. 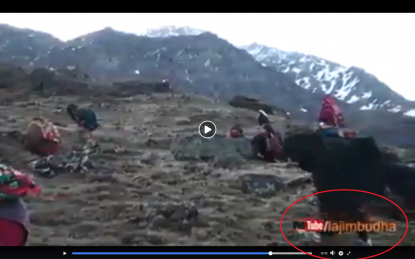 AFP searched YouTube for “lajimbudha” and found this channel, which has 149,000 subscribers.

The videos posted by lajimbudha have had 59,969,825 total views since the account was created on March 16, 2012 according to YouTube.

The exact same footage as is used in the misleading Facebook posts was uploaded to YouTube by lajimbudha on November 26, 2017 here where it has been viewed more than 2.1 million times.

The original video’s caption reads: “villagers go to highland to get yarsha at the beginning of Nepali month Jestha. They spent their around one month.”

Yarsa and yarsha are references to Yarsagumba, a high-altitude wild fungus prized for its aphrodisiac qualities.

Below are screenshots comparing the misleading 2019 footage (left) and the 2017 “Run in the Himalaya” video (right):