No, irregular immigrants in the US cannot receive ‘federal assistance’

“Illegals can get up to $3,874 a month under Federal Assistance program,” according to a Tweet shared 23,000 times by the presidential “fan account” The Trump Train. Although this claim was retweeted by the US president’s official Twitter account @realDonaldTrump, it is not true. 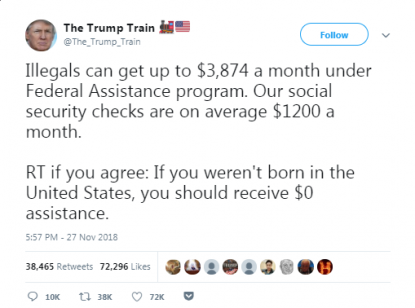 One of the larger programs, Temporary Assistance for Needy Families, which provides low-income families with financial assistance and social services, is only available when the applicant is “a U.S. national, citizen, legal alien, or permanent resident.”

Similarly, the Supplemental Security Income (SSI), for the aged and disabled, or the Earned Income Tax Credit, for low-income workers, require applicants to be qualified aliens or resident aliens, two statuses that presuppose legal registration with the Department of Homeland Security.

The number that the false tweet refers to, $3,874 per month in federal assistance, presumably comes from the photo of a 2016 invoice for a family of refugees in Canada which was first posted on Facebook in September 2017. 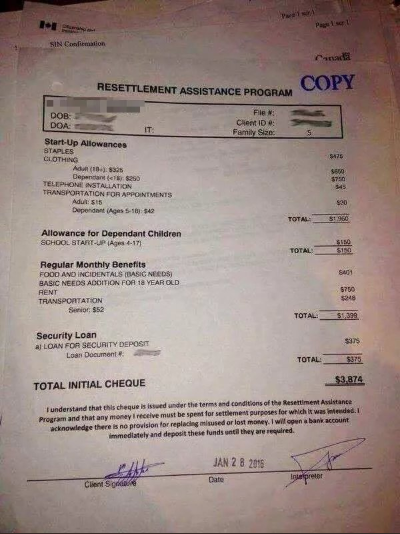 Photo of an invoice for refugee assistance in Canada (@dmartosko)

The photo is regularly presented in a misleading manner, suggesting that the check’s recipient was a single illegal immigrant in Canada. It is clear that the photo came from Canada, because the page bears the name Resettlement Assistance Program, the Canadian program for refugee assistance. The top right of the page behind also shows the Canadian government’s logo, and the words “cheque” and “dependant” are spelt in Canadian English. 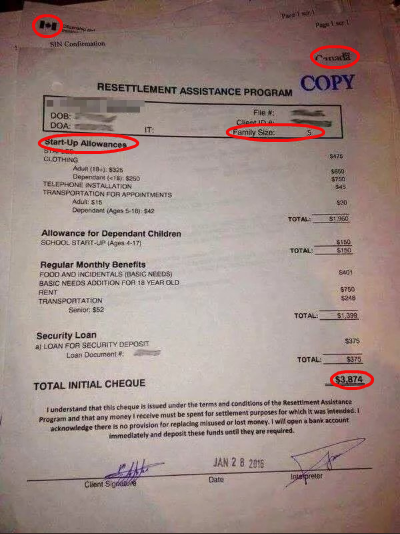 Photo of an invoice for refugee assistance in Canada (@dmartosko )

Next, the center top box summarizing the family’s profile shows that there are five members, not one, including at least one under 18, one over 18, and one senior. The first section of the invoice, titled “Start-Up Allowances”, shows a total of $1,960. This number refers to a one-time amount that refugees receive upon arrival in Canada, mostly for furniture and warm clothing. It does not constitute a monthly source of financial support. You can read more from AFP Fact Check about the misinformation surrounding the Refugee Resettlement Program here and here.

No single immigrant, whether legal or illegal, receives $3,874 each month from a federal assistance program in the United States or in Canada.

No, this is not a photo of an Indian policeman kicking a religious devotee

No, this is not a photo of people killed in a 2002 train attack in India