No, all refugee families in Canada do not receive $50,000 in aid from the government

What are we verifying?

“Refugee family of four makes $50,000 a year in freebies without having to work,” states a meme shared on a Facebook page with more than 18,400 followers. 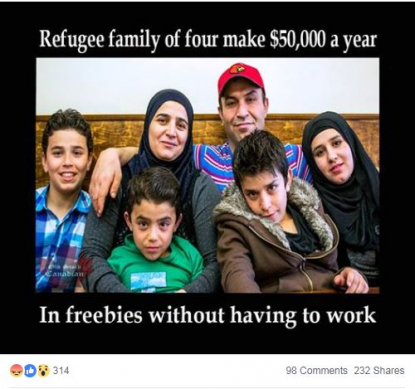 A second Facebook post, shared more than 13,000 times since September 15, also emphasized the maximum funding available to refugee families and highlighted a perception that the Trudeau government tried to hide the cost from Canadians.

What do we know?

Using Freedom of Information requests, The Rebel Media, an online political commentary website based in Ontario, obtained emails in which one media relations officer for Immigration, Citizenship and Refugees Canada told another to avoid mentioning the top assistance amount available to families of $50,000, and instead give more detailed numbers to a reporter.

Nancy Caron, the spokesperson for Immigration, Citizenship and Refugees Canada who authored one of the emails released by The Rebel, told AFP by email, “Every family situation is unique and the support they are provided is based on their needs. Typically, the actual amounts issued per family are much less than $50,000, as they are based on prevailing social assistance levels.”

While the revelation of the emails by The Rebel heightened awareness of the top amount of assistance available to refugee families, the $50,000 figure had been reported by the Canadian Broadcasting Corporation in 2017.

The Canadian government provides different levels of assistance to refugees based on where they settle in the country. Documents for the refugee sponsorship training program state that income support for refugees has two components: “start-up allowances and monthly income support.”

A “start-up cost” payment is made to families to help purchase necessary clothing, furniture, linens, and other household needs like utility installation associated with settling in Canada. In Ontario, the payment totals range from $3,065 for a single adult with no dependents, to $8,970 for a couple with four dependents, plus $1,015 for every additional dependent. Families with school-aged children also receive a school start-up allowance of $150 per child. 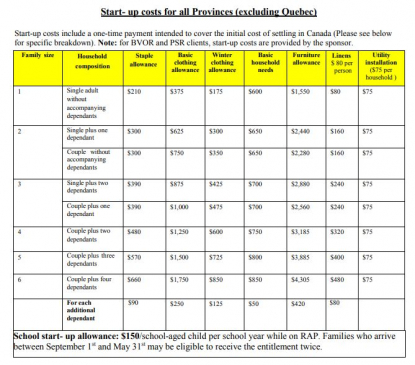 Beyond the start-up assistance, refugee families receive monthly income support. The amounts vary by province, but looking at the largest family detailed on the chart for financial assistance provided to refugees in Ontario, a couple with four children is eligible for a basic needs allowance of $486 per month, a monthly $831 shelter allowance and a $30 communication allowance. A housing supplement of up to a maximum of $200 per month can be received if the family’s actual housing costs exceed the basic shelter allowance. Each adult also receives a transportation allowance “per the rate of public transit in their community” or of $75 if there is no public transit.

Other special allowances may apply to families with newborns, women who are pregnant, people with medically verified dietary needs or if funeral/burial costs are needed. 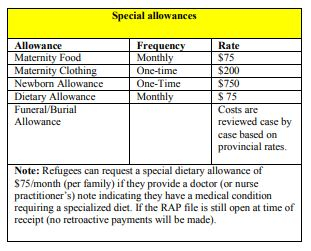 Examining the example in the first meme, a “family of four” who settles in Ottawa with two school age children will receive a start-up payment of $6960.

That same family would receive a monthly basic needs allowance of $486, shelter allowance of $744 and $30 communication allowance. Assuming they qualify for the additional $200 in monthly housing supplement, this would add up to $17,502 in aid for one year.

The Presto pass to ride transit in Ottawa costs $116.50 per month. In a family with two adults, this transportation allowance would come to $2,796 annually.

It is also important to note that many refugees in Canada get their start-up and monthly financial support from private individuals or organizations which choose to sponsor them. In 2016, Canada received 18,362 privately sponsored refugees. Blended visa office referred refugees, whose financial assistance is shared between the government and private individuals, numbered 4,434.

What can be concluded?

When asked by AFP, the Canadian government did not specify how many refugee families had received the maximum assistance of $50,000. Large families are eligible for sizable start-up assistance payments, but this is one-time aid. Monthly assistance is based on the prevailing social assistance level of the province where the family is living.

It is also clear that Canada welcomes many refugees supported by private assistance. In its multi-year Immigration Levels Plan the government set a target for 2018 of 43,000 total refugees and protected persons, with a target for 18,000 of them to be privately sponsored refugees and 1,500 blended visa office referred refugees.

No, NGOs did not land 'hundreds of thousands of immigrants' in Italy

No, walnut shells do not get rid of spiders