No, Indonesia’s government watchdog has not announced Jakarta’s governor will be sacked

Indonesian website kataku.pw published an article on July 31, 2018, with a headline that translates to: “ASN Commission officially declares Anies Baswedan guilty and Anies will be removed from his position.”

The ASN commission refers to the state civilian bureaucracy commission, or KASN, which investigates allegations of ethical violations in the public sector.

The article said Baswedan did not follow correct procedures when he dismissed a group of bureaucrats between January and July 2018.

However the article did not repeat the claim in the headline that KASN had declared he would be dismissed.

The story has been posted to at least five Facebook groups, according to CrowdTangle, a social media monitoring tool.

All of the groups claim to be supporters of Baswedan’s predecessor Basuki Tjahaja Purnama, or President Joko Widodo, who is an ally of Purnama and governed Jakarta before winning the presidency in 2014. 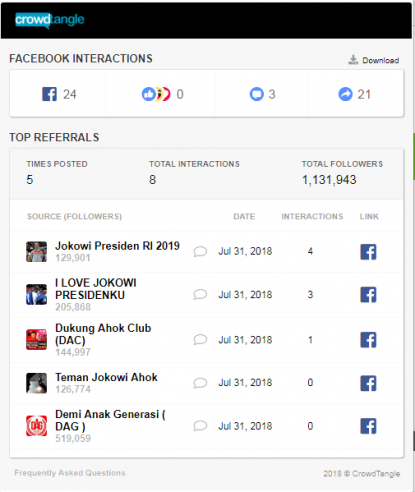 Snapshot of the CrowdTangle data.

A KASN official told AFP that Baswedan had violated bureaucratic procedures, but the agency had not called for him to be removed from his job.

“We don’t even have the authority to order the removal of any governor,” said Made Suwandi, a senior KASN official responsible for investigating alleged ethical violations.

A July 27 agency statement outlining its recommendations in the bureaucrat firing cases, which is available on its website, does not say it called for Jakarta’s governor to be sacked.