Skip to main content
A view of an oil sands extraction facility near the town of Fort McMurray in Alberta Province, Canada in 2009 (Mark Ralston)

No, Canadian oil is not the cleanest source of energy in the world

Reacting to a Canadian Federal Court of Appeal verdict that effectively halts the construction of the Trans Mountain Pipeline, Conservative leader Andrew Scheer decried the Trudeau government's "failure to champion the world's cleanest, most ethical, environmentally-friendly energy in the world." As a fossil fuel, oil is the third most polluting source of energy, and Alberta's oil sands emits the most greenhouse gases during extraction of all types of oil produced worldwide.

The Trans Mountain Pipeline project is indefinitely on hold because the Canadian government failed to adequately address First Nations' concerns over the project, the Federal Court of Appeal decided on August 30.

Conservative Party of Canada and Official Opposition leader Scheer subsequently tweeted about his disappointment to see the project buried. "Canadians are paying, literally, for his utter failure to champion the cleanest, most ethical, environmentally-friendly energy in the world," he wrote on the day of the verdict, blaming Prime Minister Justin Trudeau for the Court of Appeal's decision.

What a total mess Justin Trudeau has made. Canadians are paying, literally, for his utter failure to champion the cleanest, most ethical, environmentally-friendly energy in the world. This has to change. https://t.co/q2FzkgAu79

The 890,000 barrels a day that the Trans Mountain Pipeline extension would transport from Edmonton, Alberta, to the Pacific Ocean in order to be shipped abroad, are far from the cleanest energy in the world.

"It's pure ideology that can't stand up to even the most cursory fact-check, as independent research has consistently shown that oil extracted from the tar sands (another term for oil sands) is amongst the most carbon-intensive petroleum on the planet,"  Keith Stewart, Senior Energy Strategist for Greenpeace Canada, told AFP in an email.

Comparing all sorts of energy production by tonnes of carbon dioxide (CO2) emitted per gigawatt hour of electricity produced, oil generally comes second or third worst, according to most studies. One report, published by the World Nuclear Association, an international organization representing the nuclear industry, compared 21 studies from government agencies, universities and industries. By this account, with a mean average of 733 tonnes of CO2 produced for every gigawatt hour, oil is the third biggest emitter, after Lignite, or brown coal, and regular coal. 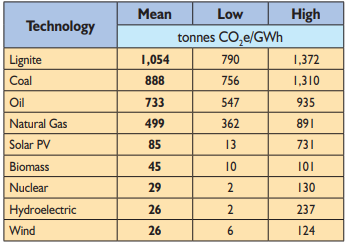 Because oil is more often used as a fuel for vehicles than to produce electricity, another way to look at it is to compare the greenhouse gas (GHG) emissions from the production and combustion of Albertan oil with other types of oil. Even if results vary depending on the study, and even if oil sand extraction has become more energy efficient since the 1990s, Albertan oil is consistently found to be more polluting than other types of oil.

At the lowest end of estimations, IHS Markis, an industry consultant not affiliated to any academic institutions, found "transportation fuels produced solely from oil sands result in well-to-wheels life-cycle greenhouse gas emissions 5 to 15 percent higher than the average crude refined in the United States." 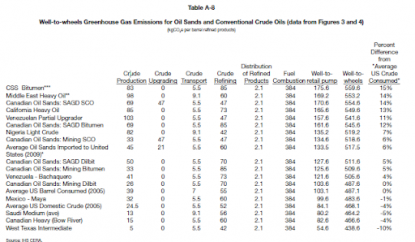 Chart from the IHS Markis

What conclusion can be drawn ?

No studies suggest that oil sands crude from Alberta is the cleanest of all types of oil, let alone the cleanest type of energy in the world.