No, this bloodied Koran was not found at the scene of the Christchurch mosque attack

An image of a blood-soaked Koran has been shared thousands of times on Facebook, Twitter, Instagram and Baaz, a social media platform for the Arab world, alongside messages deploring the mosque attack in Christchurch, New Zealand last Friday. Some of the posts claim the photo was taken at the scene of the attack. This is false; the picture already appeared online in September 2018.

One version of the picture, posted by a Facebook page claiming to be “the Only Authentic Page Of” Maulana Tariq Jameel, a Pakistani Islamic scholar and preacher, was captioned: "This is the Image of the Quran, my friend was reading in #ChristChurch #NoorMasjid,#NewZealand when he got Shaadah. He went early so he can offer his Jummah (Friday prayers) in first Row. Maasha Allah (God willing) what a way to meet Allah.” 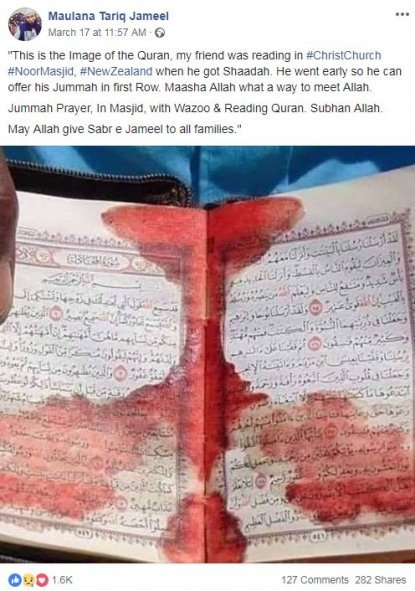 Screenshot taken on March 19, 2019 of a post claiming the bloodied Koran was from the Christchurch mosque in New Zealand

The same image has been shared more than 4,000 times with varying captions that link it to the attack at two mosques in Christchurch which left 50 people dead and dozens injured (the full AFP story can be read here).

Many of these posts, from India and Pakistan to Nigeria, express sympathy or anger over the attack, often alongside the caption: “This noble Quran will be a witness of the martyrs in New Zealand.”

Other posts more explicitly state that it was taken at the scene of the attack, such as here and here.

But a simple Google reverse image search shows that the image was already online in September 2018, and therefore cannot have been taken after Friday’s attack in New Zealand.

The first version we can find online was posted by the Twitter account “Muslim Daily”, with a caption claiming it was taken in Somalia after a US drone strike on Al-Shabab militants.

A Quran stained with the blood of children massacred in a US drone strike in Somalia that destroyed a Qur'an school and a Hospital. pic.twitter.com/qDBdWh0RdO

The US has been carrying out military operations against the Somali militants for a decade, although we have been unable to verify whether this photo was in fact taken in Somalia. However, we can say with certainty that it was not taken after the New Zealand attack.