No, this video does not show a Christian church being attacked in New Zealand after deadly shootings at mosques in Christchurch

A video viewed hundreds of thousands of times on Facebook and Youtube purports to show a Christian church being attacked in New Zealand after deadly mosque shootings there in March, 2019. The posts are false; the video is of an incident in Egypt in 2013.

The video has been viewed more than 400,000 times in the first three days after being uploaded to Facebook here on March 16, the day after a gunman killed at least 50 worshippers at two mosques in the New Zealand city of Christchurch.

Here is an AFP report about the shootings published on March 18.

The Urdu-language page that shared the video has more than 69,000 followers and its location is listed as Pakistan. 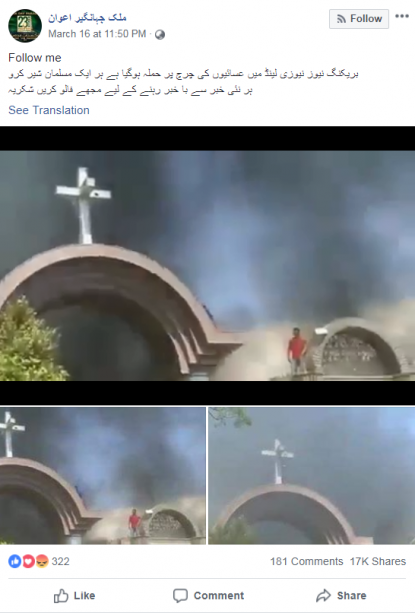 The Urdu caption in the post translates to English as: “Breaking news - A Christian church in New Zealand has been attacked. Each Muslim should share this. Please follow me to stay updated for every news, thanks”.

The video shows a church burning while two men, wearing a red t-shirt and a blue t-shirt, stand on the church wall. A crowd can be heard cheering and speaking Arabic below him.

The video was also shared in other Facebook posts, including here here, and here with the same claim in Urdu on March 16 and 17.

The videos in these three posts has since been more than 30,000 times, combined and the posts shared more than 2,000 times.

The same video was also shared on YouTube with the same claim here, here and here.

It was also shared on Twitter here with the same claim.

AFP established the misleading video was in fact captured in the city of Sohag, Egypt, in August 2013, by conducting multiple reverse image searches on Google and conducting several keyword online searches in Arabic.

Here is an earlier version of the same video on the YouTube channel of a news agency called ‘MidEast Christian News (MCN)’:

The caption shown at the beginning of the video reads: “MCN obtained video of the attacks targeting Sohag Diocese in Upper Egypt. The video reveals the details of the attack and burning of the church and its services to the building, after dismantling of the Brotherhood sit-ins on August 14.”

The MCN video was used in a news report published by Fox News on August 30, 2013, here.

In order to verify the MCN video, AFP conducted a search on Facebook for attacks on Coptic churches in Sohag in August,2013.

Through the search, AFP located an official Facebook page for St. George Church of Sohag, which posted multiple images of damage caused by a fire at the church in August 2013.

Here is a link to one of the images.

The style of the church bell tower also corresponds with this image tagged to the church’s location in Sohag on Google Maps.

Below is a screenshot of that image: 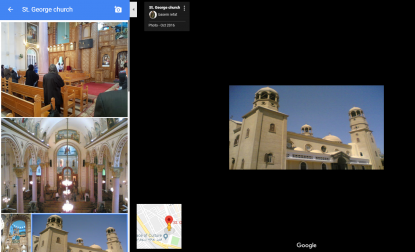 The MCN footage and the photos on the St. George of Sohag Facebook page corresponded with this Human Rights Watch report, which references the attack on St. George Church in an article about mass attacks on churches in Egypt published on August 21, 2013.