No, bell peppers don’t have a gender

A meme on Facebook post claims that it is possible to tell whether a bell pepper is male or female by the number of bumps on the bottom of the fruit. The claim is false; bell peppers do not have a gender.

The meme’s text reads: “Flip the bell peppers over to check their gender. The ones with four bumps are female and those with three bumps are male. The female peppers are full of seeds, but sweeter and better for eating raw and the males are better for cooking. I didn’t know this!” 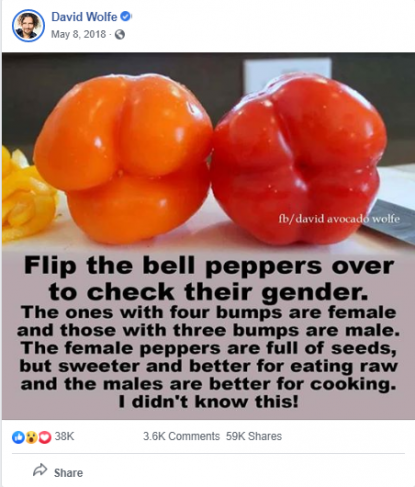 The long-running claim is false, as bell peppers do not have a gender.

In an August 28, 2019, email to AFP, Zhonghua Chen, associate professor at Western Sydney University’s School of Science and Health, explained why:

“Capsicums (Capsicum annuum), also called sweet peppers, have individual flowers containing both male parts (pollen-producing anthers) and female parts (stigma and ovary). This means that all capsicums are ‘fruits’ that form from the fertilisation of the ovary and the fruit itself has no ‘gender’. The fruit contains several hundred seeds which are capable of producing new plants with both male and female flower parts in the one flower.”

The number of seeds in the fruit doesn’t affect the flavour, either.

“Research into the flavour of capsicums has mostly focused on the differences between sweetness (sugar levels) and sourness (acidity). Unlike hot chilis, capsicums (sweet peppers) contain little capsaicin (the spicy compound), so their flavour is the result of volatile chemical compounds, sugars, carbohydrates and the different textures of the smooth skins and the rough softer flesh inside,” Chen said.

“The number of seeds does not affect flavour, but may reflect the plant’s vigour, the quality of pollination and even the grade of the fruits as each seed is the end result of a pollination process.”