This controversial anti-immigrant billboard was not vandalized in Halifax

A popular tweet showed an anti-immigration billboard in Nova Scotia after it was allegedly vandalized in order to defame the leader of the People’s Party of Canada Maxime Bernier. The sign was actually not vandalized and the billboards were taken down by the advertising company after a public controversy. 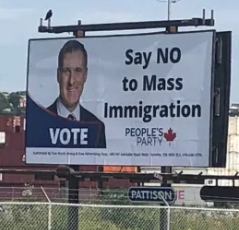 On August 25, a Twitter user tweeted a photo of one of the billboards in Halifax with a different message: “Say NO to ass man,” claiming the billboard had been vandalized. The photo received 11,000 retweets, 56,000 likes and many other users shared it as a screenshot on Facebook. 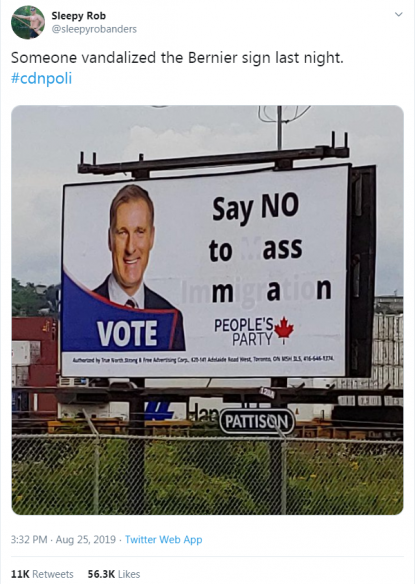 However, the vandalism did not take place. The photo was digitally altered to make the billboard spell the message denigrating Bernier.

Halifax reporter Alexander Quon pointed out that even as the pro-PPC message was being replaced by a different ad, the original letters were still visible. The containers in the background and the fence in the foreground confirm the location. 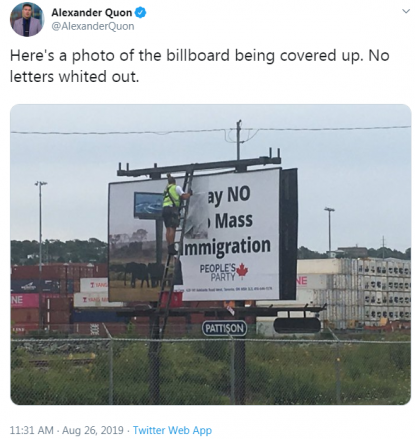 Quon works for Global News, which published this video of a Pattison Outdoor Advertising employee covering the billboard.

The billboards attracted attention because of their anti-immigration stance, with Nova Scotia premier Stephen McNeil calling the tone of the ads negative and divisive in a tweet.

The PPC denied any involvement in the billboard campaign, which was actually orchestrated by third-party advertiser True North Strong & Free Advertising Corp.

On August 25, following criticism of the campaign, Pattison Outdoor president Randy Otto stated via Twitter that the ads would be removed as soon as possible.

“The True North Strong & Free Advertising Corp was created as a vehicle to help third-party activists promote their views prior to the upcoming election with the intention that this would be welcomed as an innovative way to participate in our democratic process,” he wrote.

Smeenk did not return AFP calls for further clarification by the time of publication.

Bernier, whose face was used on the billboards, seized the opportunity to support the anti-immigration message of the ads, a cornerstone theme in his campaign, with a series of tweets.