US rapper Lil Nas X's so-called “Satan Shoes” feature the famous Nike swoosh, prompting critics to accuse the footwear and clothing giant of heresy. But the shoes were designed by a different company, and Nike denies any official tie-up with the release and said it has launched a trademark infringement complaint.

“Nike to Release a Shoe Dedicated to Satan with a Pentagram and Human Blood in it,” reads the text of a meme shared on social media following the launch announcement by Lil Nas X.

The meme shows the rapper, best known for the 2018 song “Old Town Road,” holding one of the shoes, a Nike Air Max 97 featuring a bronze pentagram and a reference to the Bible verse Luke 10:18 (“I saw Satan fall like lightning from heaven”). The soles of the shoes -- in a limited run of 666 pairs -- allegedly contain a drop of human blood mixed with red ink. 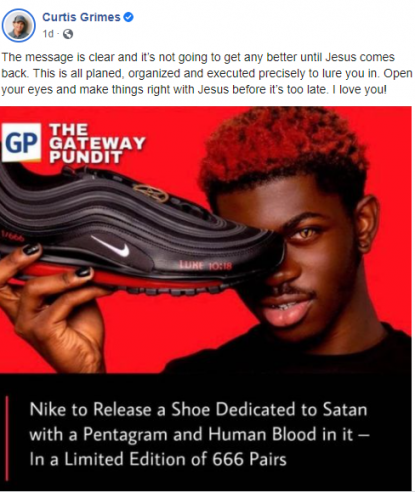 The meme was shared on March 27 on the Facebook page of website The Gateway Pundit, which also published an article about the shoes. The site later updated the article, removing mentions of Nike’s responsibility after the company denied involvement.

Some public figures vented outrage ahead of the shoes’ March 29 release, when they sold out in under a minute.

“We are in a fight for the soul of our nation,” South Dakota’s governor, Kristi Noem, wrote on Twitter. “Our kids are being told that this kind of product is, not only okay, it’s ‘exclusive.’” 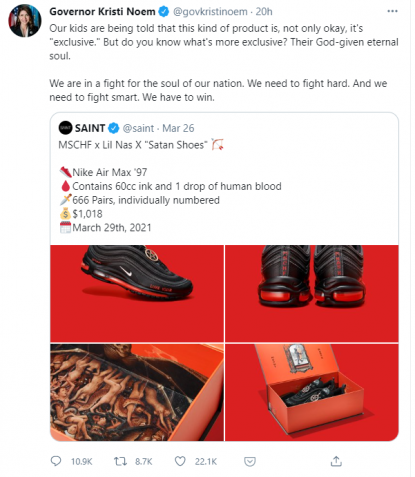 Popular televangelist Mark Burns also took to Twitter, saying: “This is evil & heresy and I pray that Christians rise up against this.”

The shoes were actually designed by MSCHF, a Brooklyn-based firm known for irreverent and bespoke products, such as toaster-shaped bath bombs. The company previously released “Jesus Shoes.”

Nike said in an emailed statement to AFP: “We do not have a relationship with Lil Nas X or MSCHF. The Satan Shoes were produced without Nike’s approval or authorization, and Nike is in no way connected with this project.”

“Nike filed a trademark infringement and dilution complaint against MSCHF today related to the Satan Shoes. We don’t have any further details to share on pending legal matters,” it said.

MSCHF did not respond to requests for comment, but told The New York Times that the blood was collected from six members of staff.

Daniel Greenberg, one of the company’s founders, told the Times that Nike was not involved in the shoes’ creation and distribution “in any capacity.”

Jane Ginsburg, a law professor at Columbia University specialized in property and trademark law, said Nike could try to stop the sale of the altered versions of its products.

However, simply mentioning clearly that the Satan Shoes are genuine reconditioned Nikes that have been altered could be enough to allow the shoes to stay on the market, she said.

The Satan theme of the shoes is inspired by Lil Nas X’s new music video, Montero, in which the 21-year-old rapper gives the devil a lap dance before snapping his neck and taking his horns.