Skip to main content
A girl and Mickey Mouse ride Dumbo the Flying Elephant at Disneyland in Anaheim, California, on May 4, 2005 (AFP / Robyn Beck)

Disneyland has not banned screaming on its rides

Facebook posts shared more than 150,000 times claim that California theme park Disneyland banned screaming on its rides. This is false; a Walt Disney Company spokesperson said it does not have such a policy, and there is no mention of it on the park’s official website, which lists mask-wearing and other measures to help combat Covid-19 when it reopens.

“California is wild,” says a March 20, 2021 Facebook post that includes a screenshot from a television report saying there is a “no screaming on theme park rides” policy at Disneyland. 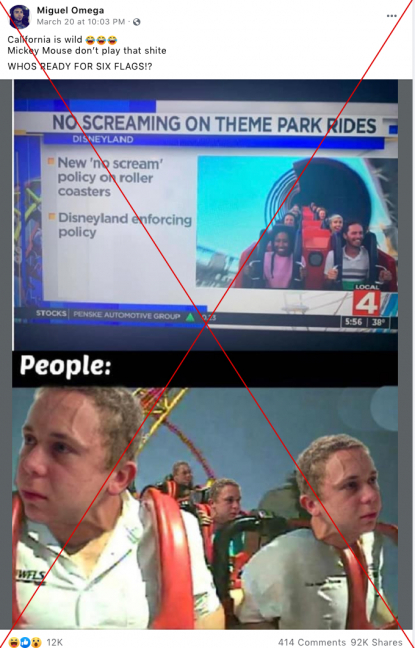 Other examples of the claim appeared on Facebook here, here, here and here, all using the same screenshot.

Disneyland Park and the neighboring Disney California Adventure Park are to reopen on April 30, 2021 after being closed for more than a year during the Covid-19 pandemic.

The false claims that Disneyland would prohibit screaming apparently stemmed from a September 2020 report by the California Attractions and Parks Association (CAPA), which represents theme parks across the state. The report noted the need to mitigate an increased risk of spreading the disease posed by shouting, but did not refer specifically to screaming.

The logo in the screenshot shared on Facebook shows that it was taken from a clip by Detroit-based TV channel Local 4 News. 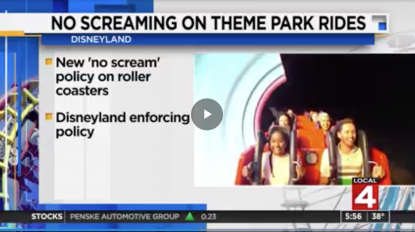 A screenshot of a Local 4 News clip taken from Critical Mention on March 24, 2021

“California’s theme parks may sound quieter, hoping to cut down on the risk of Covid-19 transmission,” Local 4 News anchor Jason Carr said in the March 18 clip, while co-host Rhonda Walker said there is “a no-scream policy” in which “Disneyland is participating.”

But a spokesperson for The Walt Disney Company told AFP by email that “no screaming on rides” is not a Disneyland policy, and there is no mention of such a rule on Disneyland Resort’s official website, which says that face coverings are required for all employees as well as guests over the age of two.

“To clear up some confusing reports in the press… At no point has CAPA recommended limiting or prohibiting yelling or screaming on amusement park rides as a way to mitigate transmission of Covid-19,” the association said in the thread.

In its September 2020 report, CAPA said parks could adopt other measures including face covering usage, modified seat loading on rides, social distancing and limiting the number of patrons.