Nigeria was not on shortlist for first batch of COVAX-sponsored Pfizer vaccines, still eligible for others

Multiple posts shared thousands of times on Facebook claim that the World Health Organization (WHO) has “delisted” Nigeria from receiving Pfizer Covid-19 vaccines under the international effort known as COVAX. This is false; Nigeria was simply not among the four African nations chosen to receive the first batch of the limited doses, but it remains eligible for the shots and expects to receive AstraZeneca vaccine shipments later in February.

A Facebook post published on February 6, 2021, and shared nearly 600 times claims the WHO delisted “Nigeria from African countries to receive COVID-19 vaccine”.

The claim is based on an article within the post that reported how Nigeria had “failed to be shortlisted by the World Health Organisation-led COVAX global initiative for the global Pfizer vaccines following the country’s inability to meet the standard requirement of being able to store the vaccines at the required -70 degrees Celsius (sic)”. 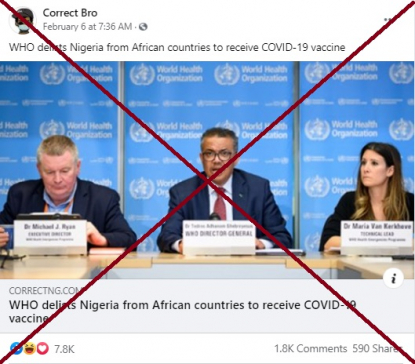 The claims were repeated in an almost identical version of the article by popular online newspaper Sahara Reporters, which said the WHO had disqualified Nigeria and eight other countries from the “global vaccine bid” known as COVAX.

Both reports relied on a statement delivered by WHO Africa regional director Matshidiso Moeti at a press conference held on February 4, 2021.

Moeti’s words, however, were taken out of context and the claims are false.

What the WHO said

AFP Fact Check reviewed a video of Moeti’s speech and a transcript available on the WHO's website and found that she did not say Nigeria had been disqualified from receiving COVAX-supplied vaccines, only that the country had failed to make the cut for the first consignment of jabs developed by Pfizer.

Moeti explained that 13 African countries had applied to get the vaccines under the first batch of 320,000 doses that COVAX had allocated for the continent. Four nations were chosen based on various criteria — South Africa, Rwanda, Cape Verde and Tunisia.

“Thirteen African countries expressed an interest in participating in the initiative, and their proposals were evaluated based on current mortality rates, new cases and trends, and capacities to deliver this vaccine, including to store it at minus 70 degrees Celsius,” Moeti said.

Deciding who would get the first vaccines “was a challenging process as we know all countries want to start vaccinating their populations”. Moeti explained that the supplies were limited but “we are glad that we will have a number of countries start and we look forward to working with the other countries to expand this vaccine delivery”.

At the same briefing, Moeti said "nearly 90 million doses of the Oxford/AstraZeneca vaccine could start arriving on the continent" later in February.

Following the publication of the false claims, WHO Nigeria representative Walter Kazadi-Mulombo said that the agency had no power to disqualify a member state from getting approved vaccines.

WHO is part of Covax facility and can never disqualify a Member State from accessing an approved vaccine for their population. I call upon members of the press in Nigeria and globally to contribute to fighting misinformation @WHONigeria.

Nigeria's minister of health Osagie Ehanire told the nation at a public briefing that the country is expecting 58 million AstraZeneca vaccine doses in total.

He said COVAX will deliver 16 million doses by the end of June 2021, while the African Vaccine Acquisition Task Team (AVATT) run by the African Union will supply an additional 42 million doses.

“We have engaged private companies that will support the production of the dry ice to make sure that as we deploy the vaccines to the sub-national level, the vaccines retain their potency,” Shuaib told journalists on February 6, 2021.