Facebook posts claim a whistleblower revealed that millions of votes were changed to favor President Joe Biden by election technology company Dominion, with some attributing the information to former New York City mayor Rudy Giuliani. This is false; Dominion says there is “no truth” to the claim, while US federal investigators have not found any credible cases of such fraud in the 2020 election.

“A whistleblower inside Dominion Voting Systems has come forward. Claims software company changed 3.8 Million votes, stealing election for Biden. There are now 3 that have come forward,” claims a May 22, 2021 Facebook post.

The post cites “Giuliani” as the source, saying the information was “POSTED ABOUT AN HOUR AGO ON CLOUTHUB 05/21/21.” 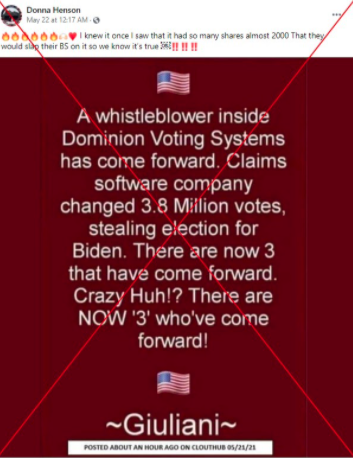 Other Facebook users shared the claim here, here and here.

“There is no truth to this,” he said.

Geoffrey Hale, Director of the Election Security Initiative at the Cybersecurity and Infrastructure Security Agency (CISA), said no credible cases of vote manipulation have been found.

“To date, the claims, which CISA and other federal partners have investigated, have not proven credible,” he added.

As former president Donald Trump’s lawyer, Giuliani repeatedly pushed election conspiracy theories and is being sued by Dominion for defamation.

However, there is no evidence that any whistleblowers from the company have come forward. A Google search for “Rudy Giuliani Dominion” brings up references to the defamation lawsuit, but not to a whistleblower.

Giuliani does have a CloutHub account, which he appears to use mainly to promote his podcast. However, as of May 26, his account showed no posts in a month.

He has also not recently mentioned Dominion or any whistleblowers on Twitter or on his website, instead focusing on the Israeli-Palestinian conflict.

Giuliani did not respond to a request for comment by the time of publication.

An online search did not reveal any May 2021 news reports on Dominion whistleblowers. Because none of the three alleged whistleblowers are named in the posts, it is not possible to verify the claim with them.

A deluge of false claims targeting Dominion’s voting machines, which were used in many US states during the 2020 election, flooded social media following the vote.

The company categorically denied the claims and has filed multiple lawsuits over the issue, including against Fox News.