Skip to main content
Medical personnel work as people seeking treatment wait in a queue to be screened at a fever clinic at the Huanggang Zhongxin Hospital in Huanggang, China's central Hubei province on March 27, 2020. (AFP / Noel Celis)

A claim has circulated in multiple Facebook, Twitter and YouTube that a "new virus" named hantavirus has emerged in China in March 2020. The posts were viewed hundreds of thousands of times as the world battled the spread of the novel coronavirus, which causes the disease COVID-19. The claim is false; scientists say hantavirus is not a new virus and was first detected during the Korean War in the 1950s; the US-based Centre for Disease Control and Prevention (CDC) says the virus has almost exclusively been found to pass from rodents to humans, rather than from person to person.

The post's caption states: “JUST WHEN CHINA & WHOLE WORLD IS TRYING TO GET CURED FROM CORONA VIRUS, HERE COMES ANOTHER VIRUS

“ONE DIED AND FEW TESTED POSITIVE”.

COVID-19 was first detected in the Chinese city of Wuhan in December 2019. It has killed more than 36,000 people and infected almost 754,000 others worldwide, according to data provided by the World Health Organization (WHO). 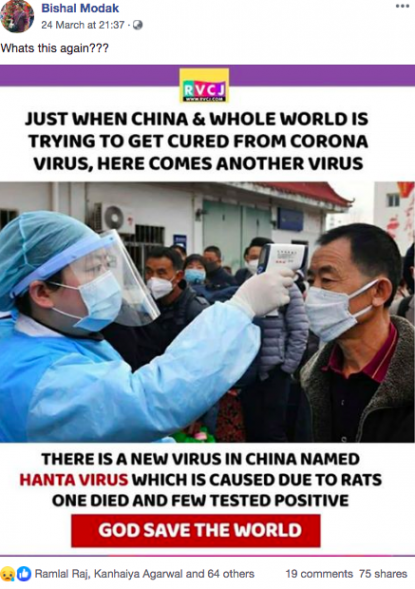 One case of hantavirus was reported in the province of Shandong here in a tweet by Chinese state media organisation Global Times on March 24, 2020.

The claim is false; scientists have said hantavirus is not new and was first detected during the Korean War in the 1950s.

This 2010 study titled “A Global Perspective on Hantavirus Ecology, Epidemiology, and Disease” was published in the peer-reviewed journal Clinical Microbiology Reviews. It states: ”In the past century, two major outbreaks of disease led to the discovery of hantaviruses in the Old and New Worlds. The first outbreak occurred during the Korean War (1950 to 1953), wherein more than 3,000 United Nations troops fell ill with Korean hemorrhagic fever, which is commonly referred to as hemorrhagic fever with renal syndrome (HFRS).”

This video produced by the University of California, San Francisco, gives more details about hantavirus.

Hantavirus is almost exclusively transmitted from rodents to humans, rather than from person to person, according to the US-based Centers for Disease Control and Prevention (CDC).

“Hantavirus Pulmonary Syndrome (HPS) is a severe, sometimes fatal, respiratory disease in humans caused by infection with hantaviruses. Anyone who comes into contact with rodents that carry hantaviruses is at risk of HPS. The hantaviruses that cause human illness in the United States cannot be transmitted from one person to another. In Chile and Argentina, rare cases of person-to-person transmission have occurred among close contacts of a person who was ill with a type of hantavirus called Andes virus,” the CDC says.

There is currently no specific treatment, cure or vaccine for HPS or COVID-19.

COVID-19 is a respiratory illness which passes from person to person. The mortality rate of for the disease is about one to two percent as of March 2020.

For HPS, the mortality rate is 38 percent, according to the CDC.

Symptoms for COVID-19 patients may take up to two weeks to develop, while those infected with hantavirus may be asymptomatic for up to eight weeks.