Skip to main content
Soldiers stand guard as they block a road near a prison in Naypyidaw on February 15, 2021, after the military seized power in a coup. (AFP / Str)

Myanmar TV did not announce obligatory military service for all adults

As Myanmar’s military continues a crackdown on protesters and rebel groups fighting its February coup, Facebook posts surfaced claiming that a major TV channel announced that all Myanmar citizens aged 18 and over must serve in the army. The claim, however, is false: the state broadcaster, MRTV-4 has not broadcast any such announcement, as of May 20, 2021.

The misleading post's caption says: "MRTV 4 Myanmar #News ....Tatmadaw announcement..11/05/21, 24:00 News. The announcement of military enlistment for all citizens in Myanmar and abroad. All citizens who are 18 years of age must enlist in the Myanmar military. Remarks: the State Administration Council said this is to exterminate all the ethnic rebels in the country and to establish union federal democracy in the country. They said to participate as soon as possible. What do you guys think? Should we join?" 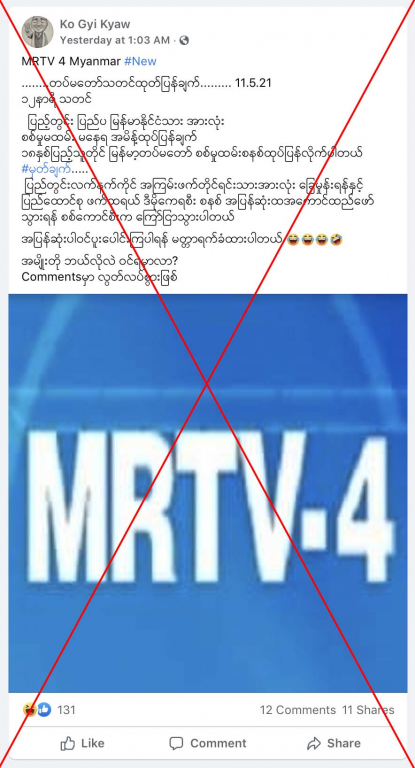 It is overseen by the Myanmar Ministry of Information, which was taken over by the military council when the junta seized power on February 1, 2021.

A similar claim has been shared here, here and here on Facebook.

MRTV-4 mostly broadcasts entertainment programmes, with popular shows including The Voice and MasterChef. The channel stopped airing news bulletins on February 2, 2021, the day after the coup.

Even before the channel stopped airing news broadcasts, there was no 24:00 news programme, as claimed in the misleading social media posts.

The Myanmar military owned TV channel, MWD, and MRTV publish their daily programmes on Telegram here and here, as Facebook and YouTube have taken down their pages, and banned their activities on their platforms.

Neither MWD nor MRTV have broadcast any announcement about military conscription, as of May 20, 2021.

AFP contacted MRTV-4 for comment but has not received a response.