A photo has been shared thousands of times on Facebook alongside a claim it shows the tomb of the Prophet Mohammed. The claim is false: the image shows a model of the tomb from the Dar Al-Madinah Museum in Medina, Saudi Arabia.

The Sacred Chamber is a section of the Masjid Nabawi or Prophet’s Mosque in Saudi Arabia that houses the graves of Islam’s Prophet Mohammed and his two close companions, Abu Bakr and Umar.

The tomb of Prophet Mohammed, who founded Islam in the 7th century, is considered one of the holiest sites in the religion and attracts millions of pilgrims from around the world.

A reverse image search traced the photo to this YouTube video. It purports to show a tour of the Dar Al-Madinah Museum in Medina, Saudia Arabia. A similar image to the one circulating on social media is visible from the two-minute 30-second mark.

Below is a comparison of the photo in the misleading posts (L) and the thumbnail image of the YouTube video (R), with what appears to be a museum placard identifying the model, circled in red by AFP:

Screenshot comparing the photo in the misleading posts (L) with the thumbnail image from the YouTube video (R). Taken on April 13, 2021.

The museum contains various models of the Prophet Mohammed’s tomb and the surrounding area.

Images of the museum from Google Maps match the models seen in the video.

Below is a comparison of some photos from Google Maps (L) and keyframes from the YouTube video (R): 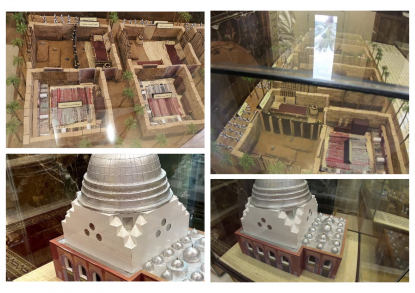 Screenshot comparison between images from Google Maps (L) and keyframes from the YouTube video (R). Taken on April 13, 2021.

Prophet Mohammed’s tomb is located in The Prophet’s Mosque in the Saudi city of Medina.

The tomb, situated under a distinctive green dome, is visited by many Muslims during their pilgrimage to Mecca.

The mosque can be seen in aerial footage here.