A series of images of archeological ruins have been circulating in Facebook posts that claim they show ancient Buddhist sites in Mecca, Saudi Arabia. The claims are false: the photographs actually show Buddhist sites in Afghanistan and Mongolia.

The post’s lengthy Sinhala-language caption says in part: “Buddhist heritage that was concealed in Arabia. Mecca is a Buddhist site. Back in the day, it was known as 'Sunnaparanna deshaya'. These are images of a vihara in the area named 'Makulata Vihara'. The ancient name of this city is Makulata'...” 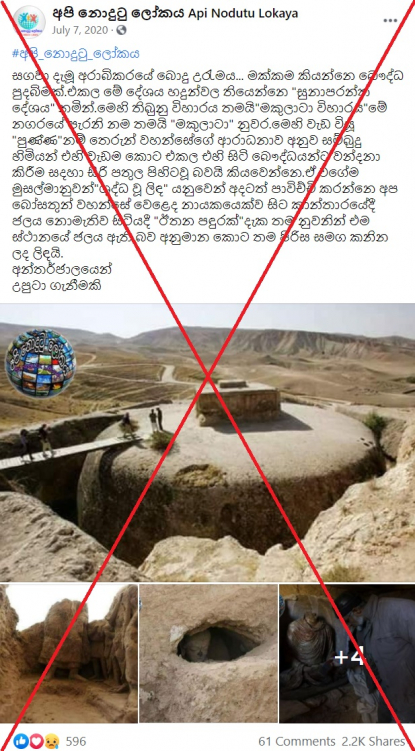 Mecca,  which is located in Saudi Arabia, is a spiritual center for Muslims and is considered the birthplace of the Prophet Mohammed. Non-Muslims are not permitted to visit the site.

The same misleading images and claim began recirculating recently, for example in these posts published here and here in April 2021.

But the claim is false: the images featured in the misleading post actually show Buddhist relics located in Afghanistan and Mongolia.

A Google reverse image search found the first image was identical to this photo taken by Getty Images photographer John Moore of a Buddhist stupa in Samangan, Afghanistan, published on October 12, 2006.

A reverse image search of the second image in the series found that the photograph actually showed Buddhist relics in Mes Aynak in Afghanistan and was taken by AFP photojournalist Shah Marai in 2010, as seen here on AFP’s Image Forum website.

Below is a screenshot comparison of the misleading image and the AFP image:

This Al-Jazeera article published in July 2015 includes the third photograph in the misleading post, which actually shows the relics at Afghanistan’s Mes Aynak.

The next image in the misleading post, showing a man cleaning a headless Buddha statue, is actually a Reuters photograph of an Afghani archeologist’s efforts to restore a Buddha figurine destroyed by the Taliban. The original image, taken in 2015 by Reuters photographer Omar Sobhani, can be seen here.

The photograph of a monument actually shows a stupa located in Khitan, Mongolia as seen here, and another of the images in the misleading post shows more Buddhist relics at Afghanistan’s Mes Aynak, as seen here.

The final image in the misleading post’s selection of images shows a woman dressed in a blue burqa. The image is a Getty Images photo taken in Afghanistan in 2011, and can be seen here .