Skip to main content
Equipment at a Capitan Energy fracking well is pictured on May 7, 2020 in Culberson County, Texas (AFP / Paul Ratje)

A photo montage circulating online suggests environmentalists are hypocritical for opposing fracking, by pointing to the ecological devastation of lithium production for electric cars. However, the post misleadingly uses a photo of a copper mine to illustrate lithium extraction and experts told AFP it's difficult to call one industry more environmentally destructive than another.

“‘Environmentalists’ Say Fracking is Evil. This is where the lithium for their electric cars comes from,” reads the caption on a photo montage shared in multiple Facebook posts, including here here, here and here. The accompanying images show a fracking site surrounded by greenery and an open-pit mine amid a scarred landscape. 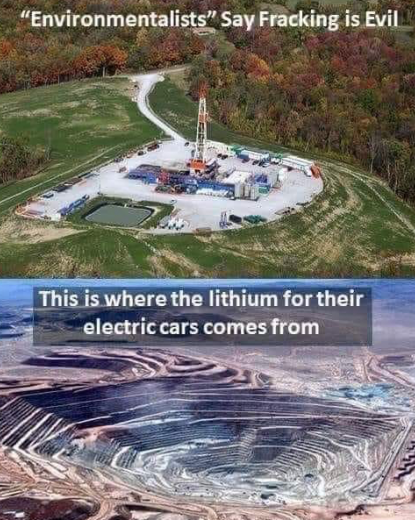 The image has been circulating online since at least 2016, a Facebook search showed, when a post on a page called Oilfield America was shared more than 20,000 times. The montage has gained traction, shared thousands more times, in the last days of the 2020 US presidential election race where energy and the environment have become an issue.

Environmentalists worry about the level of methane that fracking produces, contributing to global warming, and other dangers.

US President Donald Trump has positioned himself as a champion of the hydraulic fracturing and fossil fuels industry while former vice president Joe Biden says he wants to limit new fracking projects on federal land and move towards cleaner forms of energy if he were elected.

The bottom photo in the montage does not show a lithium mine. In fact, it shows Escondida, the world’s largest copper mine located in the Atacama Desert in northern Chile.

The Escondida mine in Chile (Courtesy of BHP Billiton)

The top photo in the meme can be found on a stock photo website with a caption that reads: “Southwestern Washington County, PA - October 13, 2012: Beautiful autumn aerial view of natural gas drilling rig located in rural Southwestern PA.”

The extraction of natural gas and oil from deep underground rock using an injection of water and chemicals boomed in the early-2000s leading the US to become the globe’s top oil and gas producer.

Experts told AFP that lithium and copper production use different methods. Fracking, copper and lithium production all produce negative effects on the environment, although it was difficult to say that one particular industry was more harmful than another, the experts said.

“It takes as much as half a million gallons of water to produce one ton of lithium using evaporation ponds. The impacts are mostly local, but they cannot be ignored,” Hallie Eakin and Datu Buyung Agusdinata, professor and assistant professor at the School of Sustainability, Arizona State University, told AFP in an email.

“Although the demand of production and storage of green energy emerged as one answer to avoid the emission of greenhouse gas, the exploitation of natural ecosystems as salt flats for lithium production is not sustainable, clearly,” Carolina F. Cubillos León, co-author of a study on microbiology in lithium brines, said to AFP by email.

Alexandru Sonoc, co-author of a study on the recycling capacity of lithium ion batteries, told AFP that production isn’t the only factor that matters when considering the environmental impact of a product.

“It is important to look at its full life cycle, not just production. Oil and gas are not recyclable. Yes, oil is used to make plastics but their recycling rate is abysmal. Lithium, from lithium ion batteries on the other hand is recycled,” he said via email. 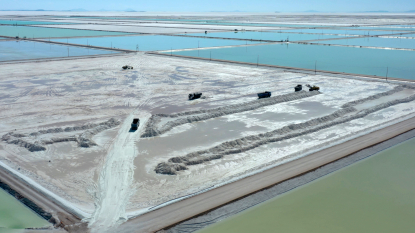 Aerial view of trucks loading brine from the evaporation pools of a state-owned lithium extraction complex in Bolivia, on July 10, 2019 (AFP / Pablo Cozzaglio)

Lithium can also be extracted from mines but more rarely. A 2018 study said that two thirds of the world’s lithium production is extracted from brine in evaporation pools.

“In Chile and other countries in South America, lithium is exploited via liquid brines extracted from saline lakes, not from rock. In fact, most of the lithium reserves in the world are in South America,” Cristina Dorador, microbial ecologist at the Biotechnology Department of Antofagasta University in Chile, told AFP in an email.

Commercialized in 1991, lithium-ion batteries have reduced the transportation industry’s reliance on fossil fuels, especially in electric cars. They’re also used in a wide range of electronics, from smartphones to pacemakers.