It is not Joe Biden’s policy to ban fracking

Facebook posts shared more than 30,000 times claim Joe Biden wants to ban fracking, a controversial oil and gas drilling technique. But he has repeatedly stated that it is not his policy to ban the practice, though he does want to limit new projects on federal land and move toward cleaner forms of energy. 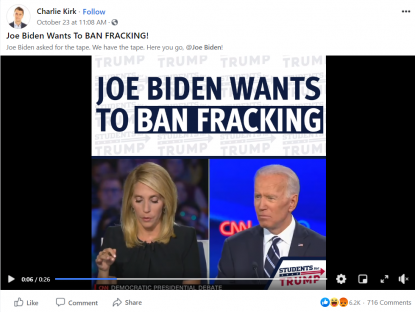 Kirk issued a correction to his post after publication of this fact check.

The post includes a clip from a July 2019 Democratic debate when Biden was asked whether there would be any place for fossil fuels including coal and fracking in a Biden administration.

"No, we would -- we would work it out. We would make sure it's eliminated and no more subsidies for either one of those, either -- any fossil fuel," Biden said.

The posts came after Biden and Trump sparred over fracking during the October 22 presidential debate, from the 1:25:44 marker in this video. Biden challenged Trump to “show the tape” of him saying he wanted to ban fracking.

But Biden stated during the presidential debate: “I have never said I oppose fracking.”

During an interview with a Pittsburgh-based television station earlier this year, Biden was also asked if he intended to stop fracking.

“No I wouldn’t shut down this industry,” Biden answered.

“I know our Republican friends have tried to say I said it. I said I would not do any new leases on federal land. Ninety percent of the leases are not on federal land to begin with.”

An ad about Biden's stance on fracking which ran over the summer was debunked by AFP Fact Check here.

His running mate Kamala Harris said on October 23 that Biden wants to ban oil subsidies, “but he will not ban fracking in America.”

The campaign’s climate plan calls for ending subsidies for fossil fuels as part of its pledge to reach a “100 percent clean energy economy” and net zero emissions by 2050. It does not mention fracking, but vows a ban on new oil and gas permits for public lands and waters.

Fracking led to a US drilling and oil production boom, but environmentalists worry about the level of methane it produces, contributing to global warming, and other dangers.

Oil and gas extraction directly employs more than 150,000 people, although the industry has said millions of jobs depend on it.