This meme features an image of a copper mine, not a lithium mine

A meme shared repeatedly since 2016 contrasts a large lithium mine with a small oil sands extraction site in order to denounce the environmental impact of lithium mining for electric car batteries. However, the top photo shows a copper mine in Chile and the majority of lithium is extracted from brine.

This meme contrasting a photo of an open-air mine with that of an oil sands rig was shared more than 172,000 times with the caption: “This is a mine where lithium is extracted for electric car batteries. This is an oilsands site in Alberta. Tell me more about how your electric car is better for the environment.” 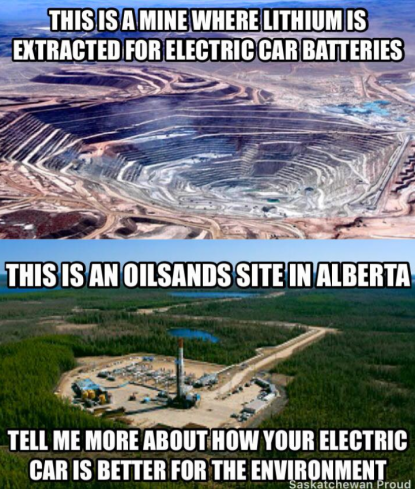 The post was shared by Saskatchewan Proud, a Facebook page that is part of a wider network of conservative-leaning Canadian Facebook pages, such as this one and this one, dedicated to issues at a provincial and federal level. Although the post was first shared in 2016, it continues to circulate.

The sheer size of the alleged lithium mine in a Mars-like landscape, compared with a relatively small oil rig surrounded by forests, seems to make a convincing point. However, the post is misleading.

The top photo shows La Escondida, the world’s largest copper mine, owned by BHP Billiton and Rio Tinto. Below is a photograph of the same mine from another angle.

La Escondida copper mine in Chile (Courtesy of BHP Billiton)

A flipped version of the photo featured in the meme was used often enough in reference to lithium mining that it is one of the first results for “lithium mine” on Google Images. 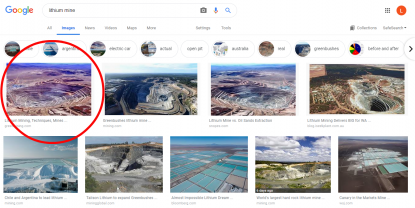 Screenshot taken on May 21, 2019 of Google Images results for the search "lithium mine"

To be sure, lithium mining is not an impact-free industry, but large open mines such as Escondida do not accurately reflect the way most lithium is extracted.

According to this 2018 study, about two thirds of the world’s lithium production is extracted from brine, in a chemically intensive process that evaporates on average half a million litres of brine per ton of lithium carbonate. Much of the world’s lithium production comes from brine pools that look like the one pictured below, in Bolivia’ Uyuni site. 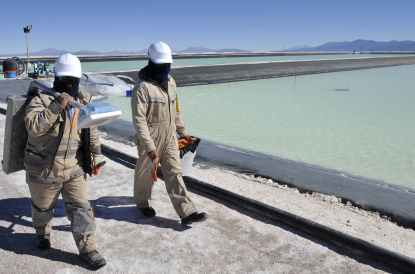 Lithium is also extracted from ore processing, although the production is not comparable to that of Chile’s Escondida copper mine. In Australia, Greenbushes, the world’s largest hard rock lithium mine, currently produces about 80 kilotons (one thousand metric tons) of lithium carbonate equivalent annually. In 2018, BHP reported that La Escondida produced 1,213 kilotons of copper.

Screenshot taken on May 21, 2019 of a photo of the Greenbushes mine on the Australia Lithium website

However, using Google Maps’ satellite view it is clear that the meme shows only a part of the Christina Lake operations. This satellite image shows the rig and two lakes visible in the meme’s photo (circled in red), but it also makes it clear that there are additional rigs on the site. 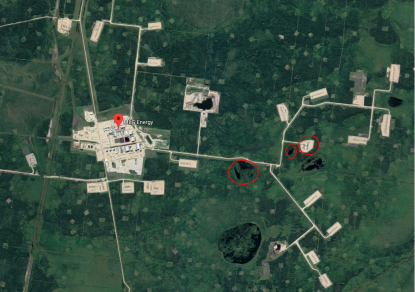 Screenshot taken on May 21, 2019 of the Google Maps satellite view of the Christina Lake site in Alberta

The Christina Lake site uses Steam Assisted Gravity Drainage (SAGD) in order to recover bitumen lying too deep to be mined (over 75 metres). SAGD is the main method of extraction for in-situ production and requires the drilling of underground wells through an oil sands deposit, in order to continuously inject steam to fluidify bitumen and pump it to the surface.

In-situ extraction has a lower surface impact than open pit mining of oil sands, Steven Bryant, professor at University of Calgary’s Department of Chemicals and Petroleum Engineering, told AFP in an email. However, studies have found that open pit mining leads to habitat loss and requires the building of tailings ponds that constitute an environmental hazard. 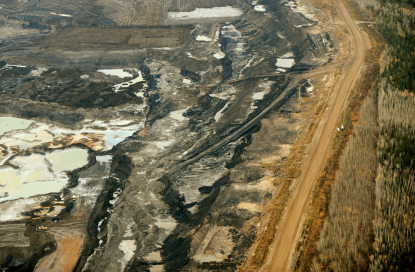 An aerial view of an oil sands site near the town of Fort McMurray in Alberta Province, Canada on October 23, 2009 (AFP / Mark Ralston)

In Alberta, oil sands reserves accessible by in-situ techniques cover an area 50 times as large as allowed through open pit mining. Researchers at The Pembina Institute argued in this study that in-situ mining was in fact, "significantly more damaging than conventional oil extraction methods,” when considering forest clearing and its subsequent impact on wildlife.

Extraction of lithium and oil sands bitumen on a large scale are both detrimental to the environment. Although lithium mines do exist, they do not compare in size to Chile’s Escondida copper mine.