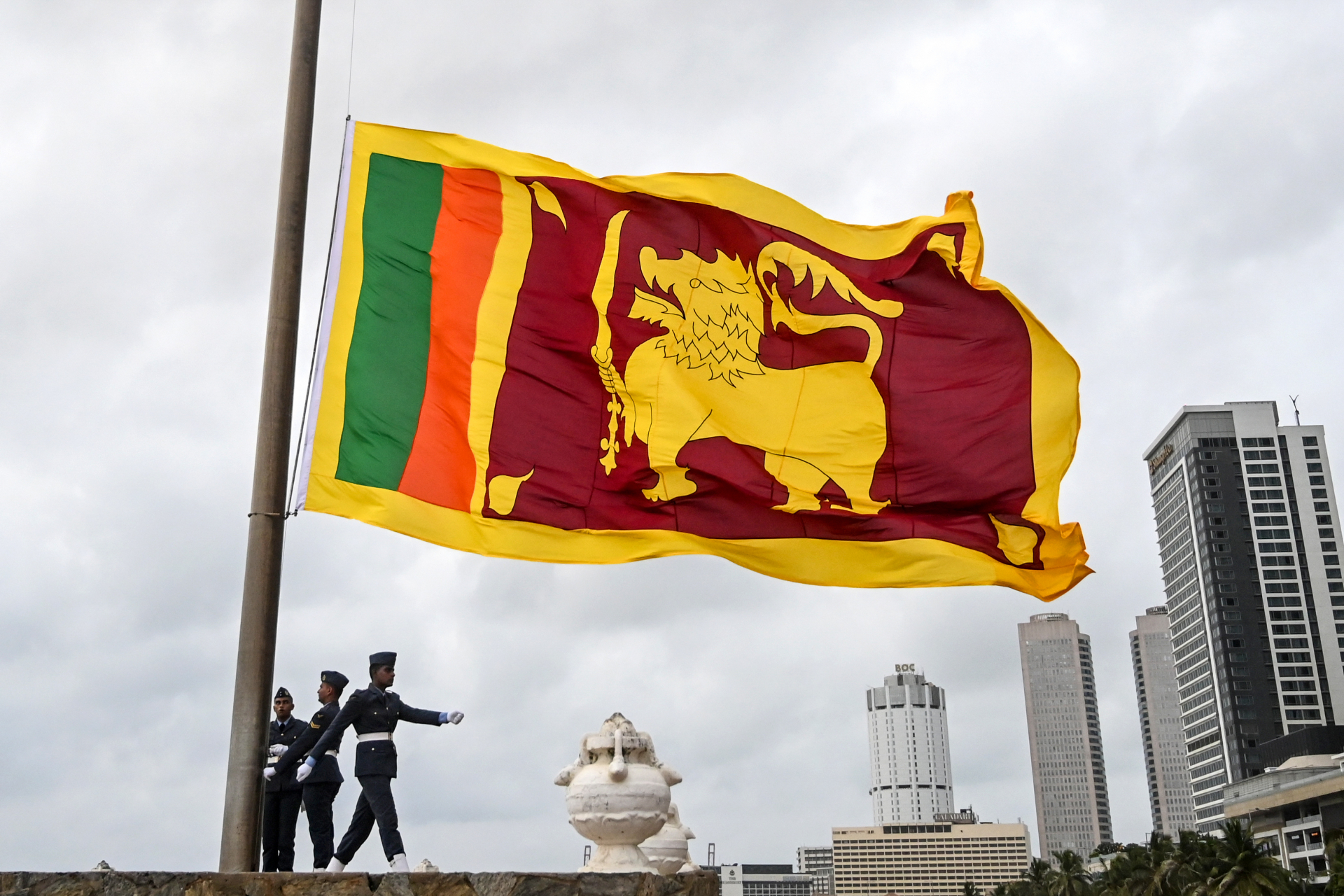 Soldiers stand at attention as the national flag is lowered as part of a daily ceremony at the Galle Face Green promenade in Colombo on May 17, 2020. (Photo by ISHARA S. KODIKARA / AFP) (AFP / Ishara S. Kodikara)

Multiple Facebook post shared hundreds of times claim that they show the current Sri Lankan Defense Secretary was filmed praising a former minister who is alleged to have had a connection with a terrorist suspect. The claim, however, is misleading; the video that was screenshotted in the posts does not show the defense secretary making the alleged remarks and his comments have been taken out of context.

The claim was published on Facebook here on October 2, 2020.

The caption of the Facebook post that shared the screenshot translates to English as: “To stoop so low that you praise someone like Rishad. You have a good for nothing mouth, Kamal Gunaratne”. 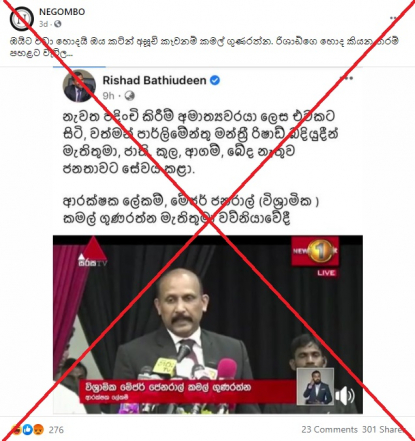 The post refers to alleged remarks that Gunaratne made during a speech at the opening of an auditorium in Vavuniya, a town in Sri Lanka’s Northern Province, on October 1, 2020.

Minister Rishad Bathidueen allegedly had a connection to a suspect linked to the Easter Sunday bombings in Colombo in April 2019, Sri Lanka's Daily Mirror reported here. He stands accused of personally intervening to secure the suspect's release, a claim which both he and the ex-army chief Mahesh Senanayake denies, the newspaper reported.

A similar claim about Gunaratne praising Bathiudeen was also published on Facebook here, here and here.

Gunaratne’s speech was published here by Sri Lankan TV channel Sirasa on October 1, 2020. The clip in the misleading posts can be seen from the video’s 14-minute 31-second mark to the 15-minute nine-second mark.

The full clip shows that Gunaratne does not make the alleged comment about Bathiudeen. He in fact offers general praise on successful resettlement procedures for internally displaced persons.

Gunaratne's remarks in full are: “The government then appointed me as the competent authority on internally displaced persons. I remember then, the Minister of resettlement was current MP Rishard Bathiudeen. All of us worked without any ethnic, religious, caste or creed differences, with the Sri Lankan identity as our guiding factor. We treated everyone the same and made a lot of progress in this district.”

At a press conference on October 5, 2020, Gunaratne refuted and expressed disappointment over the misleading claim about him praising Bathiudeen. The remarks were published here by local media.

“These days there is a claim circulating on social media that I praised MP Rishad. I have not praised him at any point,” Gunaratne stated. “I mentioned Mr Rishard in my speech only once - that is to say that he was the Minister in charge of the Resettlement portfolio then.”