Skip to main content
Pro-democracy protesters link hands as they march during an anti-government demonstration in Bangkok on November 8, 2020. (AFP / Jack Taylor)

Multiple Facebook and Twitter posts shared thousands of times claim that Singapore treats anyone older than seven years old as an adult in the criminal court system and suggest that Thailand should adopt a similar system. The posts claim youths aged over seven who are convicted of a crime face “the same punishment as adults”. The posts circulated online after large youth-led pro-democracy demonstrations were staged in Thailand, which saw thousands of teenagers take to the streets calling for reform. The claim is false; as of July 2020, the age of criminal responsibility in Singapore is 10 years of age; anyone aged between 10 and 18 who is charged with a crime in Singapore faces prosecution in a Youth Court and they will not “receive the same punishment as adults” as the misleading post claims. 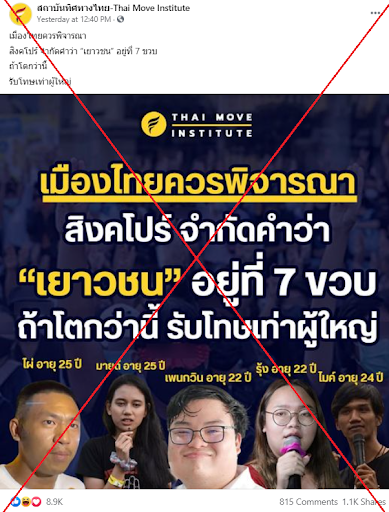 The Thai-language post’s caption translates to English as: “Thailand should consider. Singapore limits the word ‘youth’ to 7 years old. If older than this, they will receive the same punishment as adults.”

Under the Thai criminal proceedings in the Juvenile and Family Court, the term “youth” refers to a person between the ages of 15 and 17.

The post includes photos of Thailand’s pro-democracy protest leaders and their ages, including Parit Chiwarak (22), Panusaya Sithijirawattanakul (22) and Panupong Jadnok (24).

The misleading claim was shared after the three activists were released on bail over sedition charges on October 31, AFP reported here.

Student-led rallies have rocked Thailand since July, with protesters calling for the removal of Premier Prayut Chan-O-Cha -- a former army chief who came into power through a 2014 coup -- and a rewrite of the military-scripted constitution.

The boldest in the leaderless movement have also demanded reforms to the monarchy -- a once-taboo issue -- sending shockwaves through Thailand's arch-royalist establishment, AFP reported here.

Other posts with a similar claim have been shared on Twitter here and here.

As of July 2020, the age of criminal responsibility in Singapore was 10 years old. According to Section 82 of Singapore’s Penal Code: “Nothing is an offence which is done by a child under 10 years of age.”

Singapore enacted a special law in 1949 called “The Children and Young Persons Act (CYPA)” to safeguards the care, protection and rehabilitation of children and youths below 18 who face abuse or have committed offences.

The law was last amended on July 1, 2020 in a bid to “extend protection to children below 18” according to this Singapore’s Ministry of Social and Family Development (MSF) article.

The law allows young offenders to have a clean record if they complete Youth Court orders.

In contrast, any adult Singaporean convicted of a registrable crime will have a permanent criminal record, as mandated by this law on criminal records.

In Singapore, Youth Courts handle youth arrests cases. Youth defendants who are convicted of a crime are treated differently from adult convicts. Youths found to have committed offences can be sent to a juvenile rehabilitation centre.

In Thailand, children and youth arrest cases are handled by the Juvenile and Family Court.

Article 86 of this Act states that “The Director Juvenile Observation Center can issue a rehabilitation program for a child or youth which is deemed to be able to reform their behaviour without having to undergo criminal prosecution.”

Although the term youth refers to a person aged 15-17, according to Article 97 of the Act, a person below the age of 20 can be treated as a youth, depending on their physical, mental and intellectual conditions.

“In some cases, the court can consider a person aged above 18 but below 20 to be treated as a youth depending on their physical, mental and intellectual conditions.”