Multiple Facebook posts shared hundreds of times claim a group of Sri Lankan opposition politicians wore a sticker resembling a bullet wound in protest over the death of a notorious drug lord. The claim is misleading; a spokesperson for the group, who are members of the Samagi Jana Balawegaya  party, said they wore the the stickers to represent the “death of democracy” following the passing of a controversial amendment to the Sri Lankan constitution; the image of the MPs wearing the stickers was originally shared by one of the parliamentarians in a Facebook post which stated they were protesting against the constitution amendment.

The claim was published on Facebook here on October 23, 2020. The post has been shared more than 500 times. 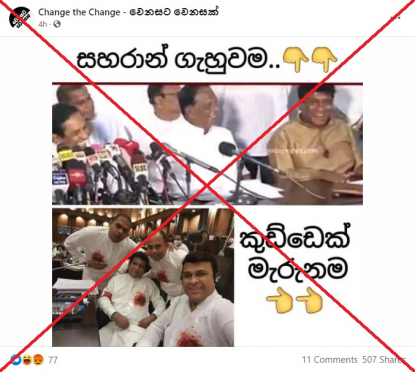 The first image in the post features a group of ministers from the previous government speaking at a press conference on April 22, 2019, one day after the deadly Easter Sunday terrorist attacks in Colombo.

The Sinhala-language text superimposed at the top of the image translates to English as: “When Zaharan attacks…”

“Zaharan” is a reference to Mohamed Zahran, who was identified as a possible ringleader of the Easter Sunday bombings, as AFP reported here.

The second image in the post features a group of opposition parliamentarians from the Samagi Jana Balawegaya (SJB) party wearing stickers that resemble bleeding wounds.

The Sinhala language text in the bottom right-hand corner of the image reads as: “When a drug kingpin dies…”

The phrase is a reference to the death of a Sri Lankan drug lord named Makandure Madhush who was shot dead on October 20, 2020 during a crossfire between police and gang members. His death was reported here by Sri Lankan news site The Daily FT.

The caption reads: “In Parliament against the 20th amendment”

The other MPs of the SJB posing in the image alongside MP Marikkar are MP Ranjan Ramanayake, MP Harin Fernando and MP Ashoka Abeysinghe.

The Sri Lankan Parliament passed the 20th Amendment to the Sri Lankan constitution, which will concentrate power with the president and allow dual citizens to hold political office. Opponents have criticised the legislative change, warning it could undermine Sri Lanka’s democracy due to concentration of power with the executive, as Al Jazeera reported here on October 22, 2020.

In response to the misleading posts, the SJB said its parliamentarians wore the stickers to protest against the passing of an amendment to the Sri Lankan constitution.

Rasika Jayakody, the SJB’s youth movement propaganda secretary, said the the protest did not relate to the drug lord’s death.

“The SJB MPs wore the sticker in protest of the government passing the 20th amendment - to decry the death of democracy,” he told AFP by phone on October 23, 2020.

Two other MPs from the SLB -- Dr. Harsha de Silva and Sarath Fonseka -- were also pictured demonstrating against the amendment here by The Daily FT.

Below is a screenshot of the image published on October 23, 2020. 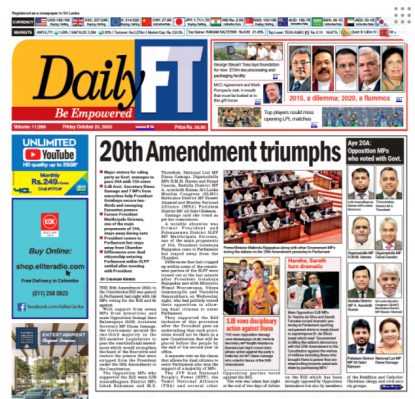 Dr. Harsha de Silva also tweeted this photo of himself wearing the sticker on his shirt on October 22, 2020.

He wrote: “#SriLanka Government is killing t nation’s democracy with t 20th Amendment to t Constitution. Against t wishes of millions including those who brought them to power they are steamrolling towards autocratic state by purchasing MPs. Disgusting.” 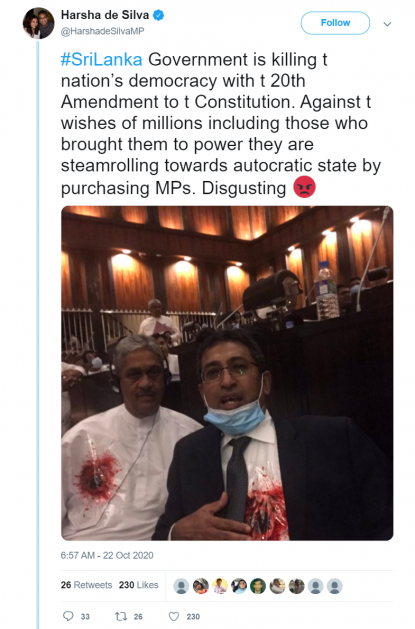