Skip to main content
Philippine Vice President Leni Robredo salutes during a wreath laying ceremony as part of the Independence Day celebration at the Rizal monument in Manila on June 12, 2019. (AFP / Ted Aljibe)

A video has been viewed tens of thousands of times on Facebook and YouTube alongside a claim that Philippine Vice President Leni Robredo compared herself to New Zealand Prime Minister Jacinda Ardern. The posts, however, omit important context; the video actually shows that Philippine news organisation Rappler made the comparison between the two leaders, not Robredo herself.

The three-minute, nine-second video was posted here on Facebook on October 18, 2020. It has been viewed more than 59,000 times since. 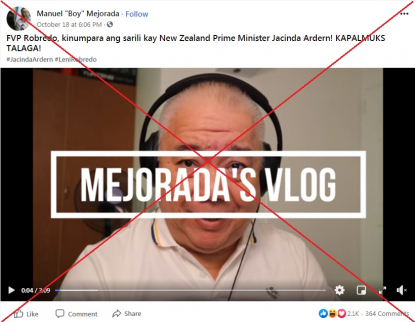 A screenshot of the misleading post, taken on October 26, 2020

The post circulated online the day after Ardern was re-elected in a landslide election.

The video does not show Robredo comparing herself to Ardern. Instead, it states it was the Philippine news organisation Rappler that made the comparison.

At the video’s one-minute and 28-second mark, the narrator states in Tagalog: “Even though she was fooled by Rappler, the yellow propaganda machine, by comparing her to the inspiring New Zealand leader, Leni is far behind in terms of knowledge and skills.”

“Yellow” is a pejorative term for members and supporters of the opposition Liberal Party, which Robredo chairs.

The Rappler report, a portion of which is flashed in the video, was published here October 5, 2020.

The report is titled “Duterte performance rating rises to 91% in 1st major survey during pandemic” and reads in part: “In contrast to (President Rodrigo) Duterte, opposition leader Vice President Leni Robredo -- often compared to New Zealand’s acclaimed Prime Minister Jacinda Ardern -- got the second to the lowest rating among the 5 top officials in the Pulse Asia survey.”

Multiple keyword searches on Google found no credible news reports or statements released by Robredo indicating that she compared herself to Ardern.