Multiple posts on Facebook and Naver, South Korea’s largest web portal, claim that 97% of sanitary towels in distribution in South Korea contain chemicals that can cause cancer. The claim, however, is misleading; the data cited in the misleading posts refer to a 2017 government report that concluded only traces of such chemicals were found and that they were insufficient to pose any health risks; South Korea's Ministry of Food and Drug Safety told AFP that annual safety tests have consistently found that “all” sanitary towels in South Korea are “safe to use”. 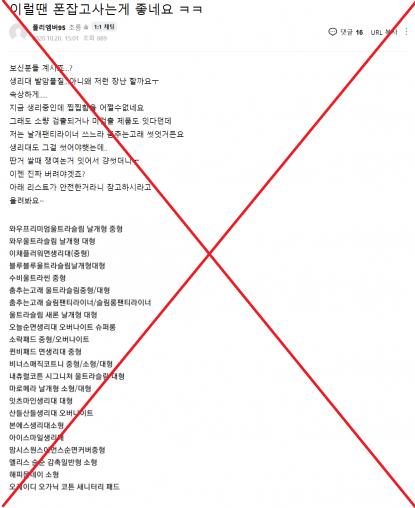 Part of the Korean-language post translates to English as: "Have you guys seen this? Cancer-causing chemicals in sanitary towels. I can't understand why [manufacturers] make these products this way. I am on my period at the moment and this unnerves me. Apparently there are some that contain less of the chemicals, some even none. I should throw out the ones I have.”

The post then lists several brands of sanitary towels that have purportedly been labelled “safe”.

The posts circulated online within days of a South Korean politician, Lee Yong-ho, publishing a report on his Naver blog that claimed 97.2% of the 666 kinds of sanitary towels in distribution in South Korea contain chemicals that can cause cancer. The October 2, 2020 release included a statement cricitising the country’s health authorities for having lax regulations on the products.

A statement about sanitary towels was published here on the ministry’s website on September 28, 2017.

The report stated that officials had investigated the safety of 666 kinds of sanitary towels and pantyliners in distribution in South Korea in 2017. They found 641 types of sanitary towels and pantyliners they investigated contained traces of at least one volatile organic compound (VOC) - such as ethylbenzene, styrene, chloroform and benzene - which could have negative health impacts, including increased risk of cancer.

The ministry concluded, however, that none of the products contained sufficient levels of such chemicals to cause harm.

The report reads in part: "Our investigation found that while there is some variation in the type and levels of VOCs detected in sanitary towels and pantyliners [in distribution in South Korea], neither the domestically-produced items nor those that have been imported, regardless of whether they have been fragranced or not, contain levels sufficient to cause harm to the human body.

"The safety committee on sanitary towels therefore find that none of the products being used by the public today are dangerous, and the Central Pharmaceutical Affairs Council too has validated these findings.”

Kim Choon-rae, head of the Ministry of Food and Drug Safety’s quasi-drug policy division, told AFP that Lee’s comments are all based on the ministry’s “outdated” 2017 report.

During a phone conversation with AFP on October 23, 2020, he said: “Since 2017, the ministry has conducted annual safety tests [on sanitary towels]. The results have largely remained the same, showing trace elements of chemicals that are not harmful to the human body. Such tests will continue every year.”

He said that although there is not yet a legislation regulating the levels of VOCs permitted in sanitary towels, a “guideline” for manufacturers is expected soon. “The ministry is currently drafting a guideline to ensure quality. It’s premature to reveal more details, but it will first be introduced as a recommendation before we look to possibly make it a regulation,” he explained.

On the list of so-called “safe” sanitary towels shared in the misleading posts, he said: “The ministry has never published such a list specifying ‘safe’ products, as we found that all products available in South Korea are safe to use. The list circulating on social media is likely to have been drawn up arbitrarily for a commercial purpose.”