Skip to main content
Sri Lankan Hindu plays with a bull at a Hindu Temple in Colombo, 16 January 2007, during the day after Pongal day called Mattu Pongal or the Pongal of the cattle. (AFP / Sanka Vidanagama)

Multiple Facebook posts shared thousands of times claim that Sri Lanka banned the slaughter of cattle on September 8, 2020. The claim is misleading; while Sri Lankan Prime Minister Mahinda Rajapaksa did propose such a ban in Parliament on September 8, no ruling was made. As of September 25, 2020, the Sri Lankan government has not enacted such a law.

The claim was published here on Facebook on September 8, 2020. The post was shared more than 11,000 times before it was deleted. 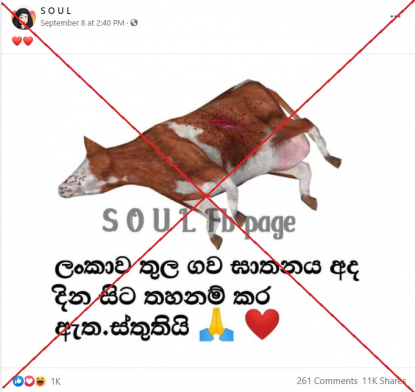 The Sinhala-language text superimposed on the image translates to English as: “Cattle slaughter has been banned in Sri Lanka with effect from today. Thank you.”

A similar claim was also shared here and here on Facebook.

In response to the misleading claim, a spokesperson from the Prime Minister’s Office told AFP that the proposed ban had not become law.

"To date, a ban on cattle slaughter has not yet been made a law”, he said in a phone conversation on September 24, 2020.

"[The ban] was an idea presented by the Prime Minister to the ruling party MPs, while pointing out that although many [previous] governments attempted to make this a law, they did not succeed. They will discuss the matter again in a month and will proceed after receiving input from various groups."

Two days later on September 10, 2020, SLPP party spokesperson Keheliya Rambukwella also discussed the proposal in this live-streamed press briefing, in which he said the September 8 discussions were “preliminary” and a “final decision” was not expected for another month.

From the video’s 35-minute 14-second mark to the 35-minute 35-second mark, Rambukwella can be heard saying: “There has been a discussion on banning cattle slaughter, but a final decision has been postponed by a month. Opinions on the idea will be sought from all sectors, and a final decision will be made thereafter. A preliminary idea was presented and we will act according to the responses we receive about the idea.”