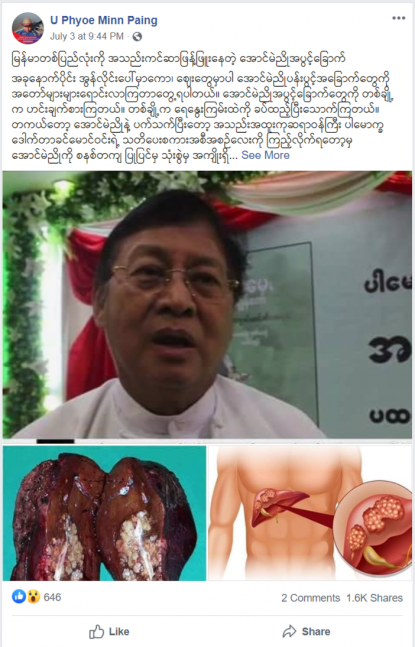 The post goes on to claim: "If you put the butterfly pea flower under the sun and use it, it is like you are digging your own grave. By putting it in the sun, it is like the flowers are dehydrated and the Benzene compound left. Benzene causes cancer.”

The post references and includes a photo of Professor Khin Maung Win, a well-known physician and hepatologist in Myanmar.

The claim, however, is misleading, according to experts.

“We have seen no evidence to support the claim that benzene is found in the Butterfly Pea nor of any cancer risk to humans from the plant,” Dr. William G Cance, the chief medical officer for the American Cancer Society, told AFP in an email on July 14.

Dr. Ruth Lunn, the director of the US National Toxicology Program’s (NTP) Office of the Report on Carcinogens, also stated that while benzene -- a naturally occurring chemical compound -- does cause leukemia, it has not been linked to liver cancer.

“The NTP has not studied butterfly pea, and therefore have not, and cannot, classify it as a carcinogen. Regarding the alleged breakdown product if put in the sun, benzene hasn’t been linked to liver cancer,” Lunn told AFP in an email on July 16.