Skip to main content
A computer shows the login page for facebook in traditional Chinese characters in Hong Kong on May 14, 2012. (AFP / Antony Dickson)

Multiple Facebook posts written in traditional Chinese claim that Facebook has adopted a new privacy policy to gain access to users' photos which "can be used in court proceedings against you". The posts were published in early July 2020, shortly after China imposed a sweeping national security law on Hong Kong. The claim is false; in response to the misleading posts on July 14, 2020, Facebook said it has made “no changes” to users' privacy settings.

The claim was published on Facebook here on July 5, 2020 by Canadian-Hong Kong journalist Lai Chak Fun, who has more than 10,500 followers on his Facebook page.

The traditional Chinese post reads, in part: “#SincerelyRemindYou
"Start from tomorrow on Facebook
"New Facebook rule,
"They can use your photos.
"It can be used in court proceedings against you.
"From today on,
"Everything you release will become public.
"Even information that has been deleted.
"#BelowIsMyStatement
"#IDontAllowFacebook
"#OrAnyFacebookRelatedEntities
"#ToUseMyPhotoInformationOrPosts
"#NoMatterInThePastOrFuture
"With this statement,
"I inform Facebook,
"[That I] strictly ban [Facebook]
"Based on this profile or its content,
"[From] Leaking,
"Copying,
"Distributing or taking any other actions.
"Content of this profile
"Is private and confidential information.
"Behaviours of privacy violation
"Can be punished by law:
"#FacebookIsNowAPublicEntity
"#AllUserMustMakeSuchNotes
"You can copy and post this version.
"If you don't make at least one statement,
"It will use your photos by default,
"As well as when your profile status is updated
"The information involved.
"#DontShare
"#ShouldCopyAndPaste.
"It costs nothing by simply copying and pasting
"Better be safe than sorry."

On July 6, 2020, Facebook, Google and Twitter said they had put a hold on requests by Hong Kong's government or police force for information on users due to China's imposition of the new security law, AFP also reported here.

An identical claim was also shared on Facebook here and here, as well as here by Hong Kong actor Gregory Wong and here by newspaper columnist Ko Wai Yin.

In an email dated July 14, 2020, a Facebook spokesperson told AFP: “We have made no change to our privacy settings.

“On Facebook people can manage their own privacy preferences. Every time you post a status update, photo or video, you can choose who can see it." 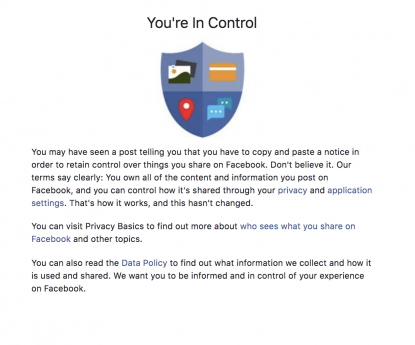 The statement reads, in part: “You own all of the content and information you post on Facebook, and you can control how it's shared through your privacy and application settings. That's how it works, and this hasn't changed.”