Skip to main content
Muslim pilgrims circle the Kaaba, Islam's holiest shrine, in the holy city of Mecca, while wearing a mask and practicing social distancing due to the Covid-19 pandemic on the final day of the annual hajj pilgrimage on August 2, 2020. (AFP / Str)

A screenshot of a news report that Saudi Arabia has given Malaysia additional hajj quota has been shared multiple times by Indonesian social media users on Facebook, Instagram and Twitter alongside a claim that Malaysia can perform the hajj pilgrimage during the pandemic while Indonesia has cancelled the hajj. The claim is misleading: the additional quota for Malaysia will only be implemented when the Covid-19 pandemic is under control, the Malaysian prime minister said. This year, Saudi Arabia only allows a scaled down hajj for fully vaccinated residents of the kingdom.

A screenshot of a news report from Antara, Indonesia’s state news agency, was shared on Facebook here on June 4, 2021. 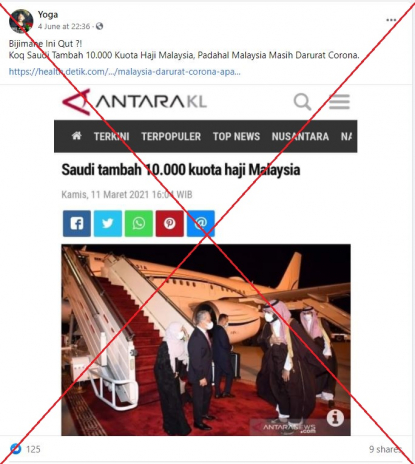 The post’s Indonesian-language caption translates to English as: “How is this, Qut?

“Why Saudi Adds 10,000 Hajj Quota for Malaysia, Even Though Malaysia Is Still Under Coronavirus State of Emergency.”

Hajj is an annual pilgrimage to the holy city of Mecca. It is mandatory for Muslim adults who are of sound mind and physically and financially capable to undertake the journey at least once in their lifetime.

Indonesia announced on June 3, 2021, that the country has cancelled the hajj pilgrimage for a second year in a row due to the Covid-19 pandemic.

Both Indonesia and Malaysia are battling a new surge of Covid-19 cases recently. By June 24, 2021, Indonesia has recorded a total of more than 2 million while Malaysia recorded more than 716,000.

Keyword searches found this March 10, 2021, news report on Antara that was featured in the screenshot.

The report quoted Malaysia Prime Minister Muhyiddin Yassin who said that the additional quota would be implemented after the Covid-19 pandemic “situation is fully recovered”.

Translated from Malaysian to English, Muhyiddin said: “The agreement is that when the situation fully recovers, then Malaysia’s application for the additional quota is approved, an addition of almost 10,000.”

The kingdom’s Hajj Ministry posted a written statement on Twitter on June 13, 2021, saying: “The total numbers of the pilgrims for the year 1442 AH (60,000 pilgrims), for residents of all nationalities and citizens inside the Kingdom of Saudi Arabia.”

Up to 10,000 people already residing in the kingdom participated in the hajj in 2020, AFP reported here.