A photo has been shared in multiple Twitter and Facebook posts in June 2021 alongside a claim it shows “the state of water in Delhi”. Indian ruling party politicians shared the posts as they urged the state’s leader, who is from a rival political party, to “do something”. The photo has been shared in a misleading context: it actually shows a water crisis in Delhi in 2009, not 2021.

It was posted by Vijay Goel, a member of India’s ruling Bharatiya Janata Party (BJP). The post has received about 6,000 likes.

The photo appears to show people surrounding a water tanker, waiting to fill their containers.

The post’s Hindi-language caption reads: “The state of water in Delhi. Do something, Kejriwal.” 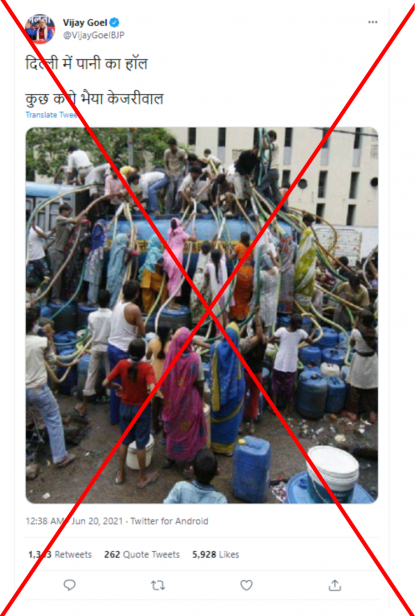 Arvind Kejriwal is the Chief Minister of Delhi and leader of Aam Aadmi Party, a political rival to BJP in India’s capital state.

The same photo was also shared alongside a similar claim on Twitter here and here; and on Facebook here, here and here.

It was also posted on Facebook by a BJP spokesperson, as seen here.

The posts circulated online as Delhi endured water shortages during the second wave of Covid-19. The problem was reported here by Indian news outlet The Print.

Water shortage is a recurrent issue in Delhi. This is partly caused by depleting groundwater supply and pollution in the Yamuna River -- one of the state's primary sources of water.

A reverse image search on TinEye found it was taken in June 2009 by news agency Reuters.

The photo's caption reads: “Residents of Sanjay Colony, a residential neighbourhood, crowd around a water tanker provided by the state-run Delhi Jal (water) Board to fill their containers in New Delhi June 30, 2009. Delhi Chief Minister Sheila Dikshit has given directives to tackle the burgeoning water crisis caused by uneven distribution of water in the city according to local media. The board is responsible for supplying water in the capital. REUTERS/Adnan Abidi (INDIA SOCIETY)”.

Below is a screenshot comparison of the photo in the misleading post (L) and the 2009 photo: 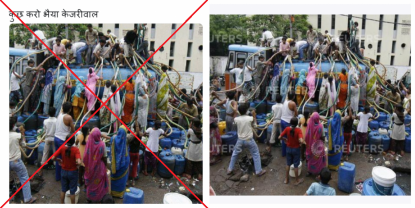 Sheila Dikshit, from the Indian National Congress, was the then chief minister of Delhi in 2009, not Arvind Kejriwal.

Kejriwal’s party was formed in October 2012.