Skip to main content
Supporters of Canadian Liberal Party leader Justin Trudeau cheer in Montreal as results show the Liberals ahead in the general elections on October 19, 2015 (AFP / Nicholas Kamm)

An alleged leak from a Liberal Party of Canada (LPC) member about a government coronavirus “road map,” including restriction of movement and military deployment, has been shared thousands of times on Facebook. The email is not authentic according to the LPC, and although the Quarantine Act allows the federal government expanded power to deal with the pandemic, it would only overrule a province or territory in an “absolutely catastrophic situation,” according to a specialist in constitutional law.

“This needs to go VIRAL!!!!! Only each person can decide if this is real or not”, continues another post shared 3,600 times.

Nearly identical claims, which include the purported leaked email from a Liberal Party insider, can be found in several other posts, including here, here and here. 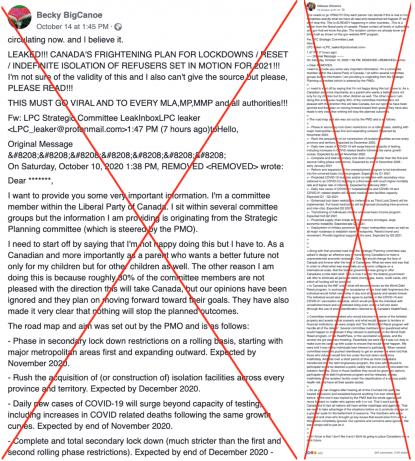 The claim was also shared on websites, including here and here. 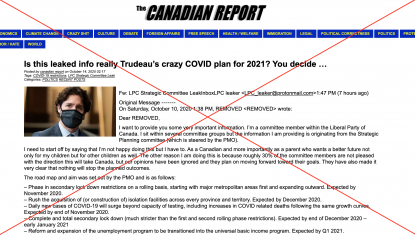 Screenshot of the website The Canadian Report, taken on October 21, 2020

However, the purported leaked email is fake.

“The post that you have referenced and others with the same content are not authentic, and no such committee exists,” said Braeden Caley, Senior Director of Communications for the Liberal Party of Canada.

The Public Health Agency of Canada has been working with the chief medical officers of the provinces and territories to guide reopening plans through a Federal, Provincial and Territorial Special Advisory Committee (SAC) created in January.

A similar committee was created to deal with the opioid crisis, and one was created in response to the H1N1 pandemic in 2009.

“The SAC has agreed on a set of 7 criteria and 14 indicators that provinces and territories can use to assess their readiness for gradually lifting restrictive public health measures in their jurisdiction,” Andre Gagnon, a spokesman for Health Canada, said. They can be found here.

“These criteria and indicators provide a data- and evidence-driven basis for decisions to lift or adjust restrictive public health measures, and would also be used to assess the need to re-introduce specific measures, if required,” he added.

Canada has seen more than 225,000 Covid-19 cases, and the number of infections spiked after Thanksgiving.

While local governments are managing pandemic lockdowns, they are coordinating with the federal authorities, and it is legally possible for the government to override the provinces, albeit in extreme cases.

Emmett Macfarlane, associate professor of political science at the University of Waterloo, said in an email, “The federal government in Canada has adopted an appropriate hands-off relationship by allowing provinces to enact restrictions under their powers over health and safety.”

“The federal government does have the authority to enact extreme powers under the Emergencies Act and the Quarantine Act,” he explained.

“Indeed, the Quarantine Act was invoked last spring in relation to people arriving from beyond the border. But only in an absolutely catastrophic situation would the federal government willingly intrude on lockdown measures for local cities/regions,” Macfarlane, a constitutional law expert, said.

The posts also specifically mention “the acquisition of (or construction of) isolation facilities across every province and territory.”

This echoes a recent disinformation campaign claiming that the government of Canada was building “internment camps.”

This false claim was decried by the Trudeau government and New Democratic Party Member of Parliament Charlie Angus.

The content of these posts is presented as a secret, internal message from an anonymous person, thus hard to formally prove or disprove. What should be questioned is the origin of the source, says Jeffrey Dvorkin, a University of Toronto journalism teacher whose book on misinformation is about to be published.

“One of the most important questions for everyone that sees a story such as this is: ‘where does this come from and what do we know?’” he said. “The fact that this is coming from one source that cannot be proven to me indicates how unreliable this information is, and frankly, how dangerous it is.”

Dvorkin also raised “bias confirmation,” where a person will only look for information that confirms what he or she already thinks, without lending credibility to other possibly contradicting information.

“And that is not a responsible way to look at information. It basically just confirms your worst fears rather than illuminate your best thinking,” he told AFP by phone.

As the Covid-19 pandemic continues, and the possibility of a snap election looms in Canada, Dvorkin says Canadians should be prepared for more false stories spreading.

“If [the stories] look too good to be true, they probably aren’t true.”