Social media posts circulating ahead of the November 3 presidential election claim that Democratic nominee Joe Biden’s tax proposal will take a 40 percent cut of profits from Americans who sell their home. This is misleading; according to Biden’s plan, think tanks and tax experts, the rate would only affect those earning more than $1 million a year.

“Biden’s Capital Gains Tax means that when you sell your home you’ll owe taxes of 40% of your profit! Let that sink in,” reads an October 16, 2020 Facebook post. 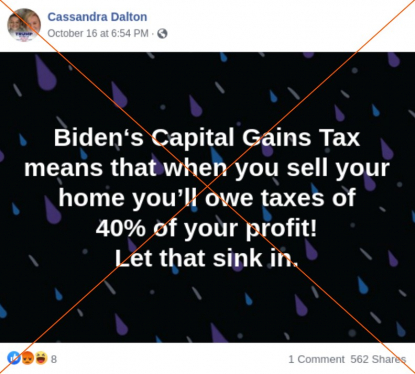 Capital gains tax is collected when an individual or a couple sells an asset, such as a house, for more money than they bought it.

Biden’s tax proposal, available on his campaign website, says that if elected president, he would restore the 39.6 percent top individual income rate and get rid of “capital gains tax loopholes for the super wealthy.”

“Biden will assure those making over $1 million will pay the top rate on capital gains, doubling the capital gains tax rate on the super wealthy,” the platform says.

Kent Smetters, business economics and public policy professor at the University of Pennsylvania’s Wharton School, told AFP that the claim circulating on social media is “incorrect.”

The Penn Wharton Budget Model (PWBM), an economic analysis project led by Smetters, released a report on October 20 which explains how capital gains taxes work and how they would be affected by the policies of Biden and President Donald Trump.

Under current legislation, US homeowners are exempt from capital gains tax if they make less than $250,000 ($500,000 for married couples) profit on the sale of their home. Certain rules apply to qualify for this exemption, such as having owned and used the house as your primary residence for at least two years.

Under Biden’s plan, sellers would only pay the 39.6 percent tax rate on profit made from the sale of their home if they make more than $1 million in taxable income annually, according to the report.

PWBM director of policy analysis Richard Prisinzano said: “Anyone making less than that amount (or who has owned the house for less than a year before the sale) would not see any difference in their tax liability from selling a house.”

Capital gains are mostly earned by the upper end of the income spectrum.

The Trump administration is seeking to decrease that rate to 15 percent. PWBM’s analysis on Trump’s tax proposals is available here.

AFP has debunked other claims about Biden’s tax plan here.