Social media posts shared tens of thousands of times claim Joe Biden wants to tax retirement saving plans. This is misleading; the Democrat has proposed no such levy but does want to replace the tax deduction for retirement contributions with a tax credit, a step analysts say would increase the tax burden for wealthy individuals while benefiting those earning less.

The actor is one of the few Hollywood celebrities to openly support President Donald Trump. 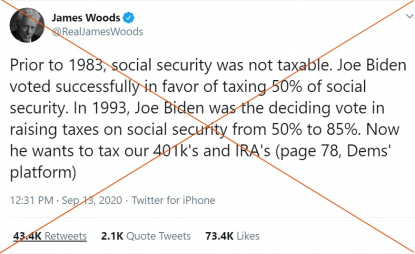 Garrett Watson, of the non-profit Tax Foundation, agreed that the claim is misleading. “That's the best way to frame it,” he said.

Contrary to Woods’ assertion, Page 78 of the Democratic Platform deals with veterans, military and transnational issues -- not retirement savings.

A reference on Page 23 to reforming the tax code promises “easier and more equitable access to tax provisions that help working families build wealth, including by equalizing tax benefits for retirement contributions,” but makes no specific mention of 401(k) plans or IRAs.

A similar pledge appears on the Biden campaign website.

Contributions to traditional 401(k) and Individual Retirement Arrangement plans are deductible from taxable income. Investment income earned by the accounts is also tax-free -- but these deferred taxes on contributions and earnings are paid when money is withdrawn.

However, the Biden plan would end the tax deductions, replacing them with a tax credit that analysts calculate would be 26 percent of an individual’s contribution.

Whether or not that amounts to a benefit would depend on a person’s income, Toder explained, using a $1 contribution as an example.

“If you're in the 15 percent tax bracket it's a benefit because now you only get basically 15 cents back from deducting it. If you're in the 37 percent bracket -- which he's going to raise to 39.6 percent --  then you're better off getting the deduction which is worth 39.6 cents than the credit which is worth 26 cents,” Toder said.

For higher income earners, “it can be looked at as a tax increase,” he added.

“Some high income people are going to lose a little bit of their tax benefit from a 401(k),” but most of those earners will still benefit from 401(k) contributions because tax-free accumulation of earnings will continue, Toder said.

Watson agreed that a reduction in the benefit for those with higher incomes “would increase the tax burden” that they may face.

“This credit is expected to be roughly revenue neutral, with the elimination of deductibility offsetting the revenue lost from the new tax credit,” Watson wrote in an analysis of the Biden plan.

Wealthier taxpayers would still have the option to use Roth accounts, contributions to which are taxed but can be withdrawn tax-free along with the earnings. This won’t change, the analysts said.

The social media posts are correct in saying that then-senator Biden voted in 1983 for the Social Security Amendments, under which a portion of Social Security benefits became taxable. But he was one of 26 Democrats and 32 Republicans in the Senate supporting the measure.

In 1993, he also supported the Omnibus Budget Reconciliation Act. It included raising to 85 percent the maximum taxable amount for some social security beneficiaries, based on a formula.

Biden was one of 50 Democratic Senators supporting that bill in the Conference Report vote. Fifty other Republicans and Democrats were against, leading to a tie-breaker vote by Vice President Al Gore. He, not Biden, was the “deciding” vote.

Republicans have falsely claimed that Biden wants widespread tax hikes, but the presidential contender has repeatedly pledged not to raise taxes on those making less than $400,000 a year.

According to Watson, Biden’s team has said the changes to retirement benefits would also not affect those earning less than $400,000, “but they haven’t specified how they would do that.”

The Verify Team, as reported by WUSA-9, first examined Biden's Social Security benefits voting record and the claim about his proposal for retirement funds.