This image shows security forces responding to political unrest in 2018

A photo of riot police walking down a street has been shared in multiple Facebook posts alongside a claim that it shows police during a drug bust operation that turned violent in a Sri Lankan town in September 2020. The claim is false; the photo was taken in 2018 after political unrest in Sri Lanka sparked a shooting.

The photo was published on Facebook here on September 12, 2020. The post had been shared 6,400 times before it was removed.

The post’s Sinhala language caption translates to English as:  “Look at the beauty of what just arrived in Atulugama.” Atulugama is a suburb in western Sri Lanka. The town made headlines in early September 2020 after residents assaulted police during a drug enforcement operation in the area.

A reverse image search found that the photo in fact shows police responding to political unrest at the Ceylon Petroleum Corporation in 2018.

The photo was published on US photography database Shutterstock here on October 28, 2018. It is credited to photographer M.A. Pushpa Kumara and has a caption that reads: “Unrest at state run Petroleum Corporation after shooting incident, Colombo.”

Below is a screenshot comparison between the misleading posts’ image (L) and the Shutterstock image (R): 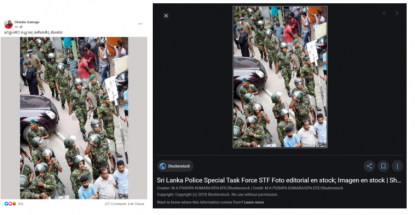 The 2018 shooting at the Ceylon Petroleum Corporation (CPC) occurred in the midst of a political crisis that followed then President Maithripala Sirisena’s removal of then Prime Minister Ranil Wickremesinghe, as AFP reported here.

Pushpa Kumara — the photographer who took the photo and a photojournalist for Sri Lanka’s weekly English newspaper Sunday Times — also confirmed that the photo shared in the misleading posts is from 2018.

“This picture was captured alongside several others during the protest in October 2018 that turned violent after a CPC worker was shot dead by ex-Minister Arjuna Ranatunga’s bodyguard,” he told AFP via phone on September 14, 2020.

His other photos of the same incident were published by other media outlets, such as the Guardian here and Agencia EFE, a Spanish news agency, here.